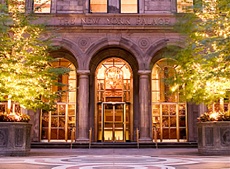 Northwood Investors had acquired the 55-storey hotel originally built in 1982 from the Sultan of Brunei in 2011 for a reported $400 million.

Soon after the purchase, Northwood Investors spent around $140 million on renovation.

The hotel features 909 rooms and suites, including 176 renovated exclusive Towers accommodations and dining venues, such as Pomme Palais. The hotel's famed Villard Mansion built in 1882 is recognized as a New York City Landmark and gracefully blends with a contemporary 55-story tower.

The acquisition of The New York Palace Hotel is the latest move by Lotte to expand globally. It has already acquired hotels in Moscow, St. Petersburg and Tashkent in Russia and Hanoi in Vietnam.

It is also constructing hotel projects in China and Myanmar.

"We hope this acquisition will heighten Lotte's global brand value and expand its presence in Southeast Asia, Europe as well as the US market," the company said in a statement.