Japanese Hotel to have robots on staff

A hotel in Nagasaki, Japan, is set to change the future of the hospitality industry with robots providing reception and concierge to housekeeping services. 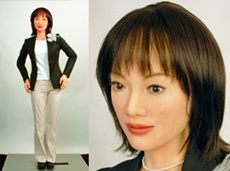 That is the goal for Henn-na Hotel, set to open this July.

According to The Telegraph, the robots would come from robotics company Kokoro, which had been developing ''actroid,'' or human-seeming, robots since 2003.

Kokoro's actroids were generally modeled on the appearance and mannerisms of a young Japanese woman and could mimic human behaviour such as breathing and blinking, speak fluent Japanese, Chinese, Korean and English.

They could also make eye contact and respond to body language and tone.

For those looking for the human touch, developer Huis Ten Bosch said the robo-receptionists, bellhops and maids would be supplemented by human staff.

However, company president Hideo Sawada told Japan Times he hoped to have robots performing 90 per cent of hotel services.

The report quoted Sawada as saying the company would make the most efficient hotel in the world.

The building itself would be comparably high-tech, CNN reported, saying guests would access their rooms through facial recognition software rather than key cards.

The Hen-na Hotel is scheduled to open on 17 July inside the Huis Ten Bosch theme park in Nagasaki.

With robots replacing human employees, the labour costs would be minimal, which would mean cheaper rates for customers. A night at the hotel would cost approximately $60 for a single room and $80 for twin sharing and rooms being auctioned off to the highest bidder during peak tourist season.