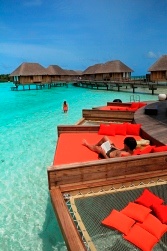 Bonomi, through his investment Strategic Holdings, has teamed up with US private equity firm KKR & Co to table a revised bid before the 20 November deadline or walk away for six months, according to media reports.

Bonomi has to beat a competing offer of €22 per share or €839 million ($1.1 billion) from Chinese financial and industrial conglomerate Fosun International, which has teamed up with some of the top management of Club Med for the deal.

Fosun's offer, which has been backed by Club Med's management, is 4.8-per cent higher to Bonomi's June bid of €21 a share.

Fosun and its partners currently hold 18.3 per cent and 24.4 per cent of the voting rights in Club Med. Their offer is contingent on obtaining more than 50 per cent of votes.

Bonomi had been slowly buying shares in the resort chain and is now the single-largest shareholder with around 10 per cent, giving him an advantage to derail the Chinese takeover plan.

Club Med, which was started in 1950 by former Belgian water polo champion, Gérard Blitz, invented the all-inclusive holiday resorts in France and is today present in 40 countries through its 80 Club Med Resorts, including beach resorts and ski resorts, such as Aime la Plagne in France, Agadir in Morocco, Cancun in Mexico and Kabira in Japan.

When the individual travel market opened up to Chinese tourists in 2003, Club Med established sales offices in Shanghai, Beijing, Guangzhou and Chengdu.

Club Méd has decided to strengthen its presence in upscale resorts, by opening five villages between 2010 and 2015. Club Med has already initiated new projects in China, in particular its first Village, as a ski resort, in Yabuli, the largest Chinese ski station in north-east China, which opened in the winter season of 2010.

Club Med's goal is to attract 5 to 10 per cent of potential Chinese visitors to 4- and 5-star vacation resorts by 2015, representing just 0.2 per cent of the total Chinese population.