State-run Life Insurance Corporation of India (LIC) continued to lead the insurance business in the country with a growth of close to 18 per cent in first year premium (FYP) income during 2013-14, against the 11.57 per cent growth recorded by it for the entire year. 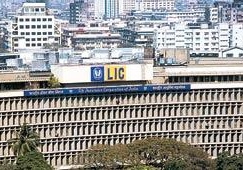 The market share in number of new policies sold has also gone up during the period by 1.20 per cent to 84.44 per cent.

Profitability of the public sector general insurance companies has also improved in 2013-14. They have, however, seen a marginal decline in their market share during 2013-14.

Reviewing the various issues related to life and non-life insurance sector, finance minister P Chidambaram has advised public sector general insurance companies to ensure that they maintain and steadily improve on the current level of 53 per cent of their combined market share.

In the case of LIC, the finance minister noted that the persistency of life insurance policies during 2012-13 has improved for the initial post-subscription years but it remains a challenge to maintain this in the latter years of the policy.

He stressed the need to study the persistency for ULIP and non-ULIP policies separately, to pointedly undertake focused efforts for each category.

It was noted that LIC maintained its excellent claim settlement track record with 99.3 per cent settlement of death claims and 99.68 per cent of maturity claims.

Chidambaram stressed the need to enhance insurance penetration and density to attain global levels in a reasonable time frame, through greater outreach and access.

Efforts would be made to overcome difficulties where possible in the few remaining towns with a population of 10000 and above, the finance minister said.

PSU insurance companies have identified Lok Adalats as the major focus area for settlement of third party motor insurance claims in the 2013-14 budget.

While the settlement ratio has improved to 50 per cent of all cases referred, which was achieved through conduct of regular and mega Lok Adalats.

The finance minister has advised insurance companies to conduct Lok Adalats in coordination with state legal service authorities in order to increase the settlement ratio further and decrease the backlog.

He suggested that the Insurance  Regulatory and Development Authority (IRDA) may examine the issue of suitably implementing through its regulatory powers the stipulation of mandatory motor third party insurance and also review the premium rates so as to reduce the burden on insurers.

A decision on the proposal for a three year policy for motor vehicle insurance under consideration of IRDA may be expedited to reduce instances of uninsured vehicles, according to the finance minister.

Chidambaram said there was a need to set up / identify the institutional arrangements for investigation and prosecution of insurance fraud, and create the legal basis for it through possible amendments to relevant statutes.

In addition, the finance minister drew attention to the need for IRDA to create standard templates to facilitate insurance companies quickly launching new products on a ''use and file'' basis. Some progress has been made on the life side, which needs to be expanded and emulated on the non-life side, he added.

The review of the performance of the public sector insurance companies is being undertaken with a view to take stock of key performance indicators and the status of initiatives taken-up in the recent past, and to identify the roadmap for continued rapid growth of the industry in the future.

The meeting was attended by heads of state-run insurance companies besides the minister of state for finance and other senior officials of the finance ministry.