Iraq has shortlisted Reliance Industries Ltd and six other companies firms for developing its Al-Nassiriya oilfield and construction of an associated 300,000 barrels per day refinery. 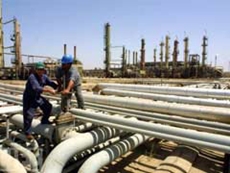 The seven qualified firms will now be invited to review data packages and discuss contract terms. Iraq intends to award the project by the year-end.

The OPEC nation has three main refineries - Baiji, Daura and Basra - with a total capacity of around 567,000 barrels per day (bpd). It wants to increase the refining capacity to 750,000 bpd through improvements in existing plants.

It also plans four new refineries in Karbala, Kirkuk, Missan and in Nassiriya.

"The Al-Nasiriya Integrated Project contemplates the development of the 4-plus billion barrel Nasiriya oil field in Thi-Qar province together with the construction and operation of a new 300,000 bpd refinery," Iraq's petroleum contracts & licensing directorate (PCLD), part of the petroleum ministry, said.