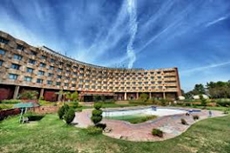 The 376-room Centaur Hotel was a landmark when it opened initially because of its flashy interiors and glass elevators. The hotel, run by Air India, however, lost its earlier glory due to mismanagement and poor upkeep.

The Le Meridien hotel at Janpath posed a challenge to the glitsy Centaur then. And, despite its prime location, an increasing number of flyers opt for other five-star hotels in Delhi and Gurgaon.

Air Inda, however, is expected to ask for land elsewhere in the 4,608-acre IGI Airport complex in lieu of this site.

A Times of India report quoting DIAL sources said, "The site is not needed for the fourth runway as that will be built slightly ahead of it towards the existing third runway (29). But we have to make additional parking bays and the Centaur site is needed for that."

Meanwhile, the lifespan of another 1982-era structure at IGI Airport - Terminal 2 - that was to be demolished in 2020 to make way for a brand new T4, may get extended. T2 served as the international terminal from 1982 to 2010, when T3 opened.

In 2010, T2 was mothballed and the Delhi International Airport Pvt Ltd (DIAL) has now made it ready to handle domestic flights of some low cost carriers (LCCs) which will be shifted here from T1.

This terminal is currently used for all domestic arrivals and departures of IndiGo, SpiceJet and GoAir. The combined traffic of these three airlines is more than the built capacity of T1 and DIAL is in talks with the three LCCs to shift a couple of them to T2 to decongest T1 as well as get space at T1 to begin expansion work there.

"Some of these LCCs are open to shifting entirely from T1 to T2 but they have only one issue - they move from T1 to T2 in early 2017 and then return to T1 in 2020, when T2 is scheduled to be demolished. They are not comfortable with the idea of shifting operations twice in three years. The budget airlines open to shifting have asked us to examine if T2 can be retained and T4 built nearby so that they don't need to move again in 2020," said the official.

This is why shifting of airlines from T1 is stuck despite the fact that the terminal is operating passengers more than its built capacity, leading to severe congestion during peak morning and evening hours.