Professor Veena Sahajwalla, Director of the Centre for Sustainable Materials Research and Technology (SMaRT) at the University of New South Wales (UNSW- Sydney), has been awarded the Jubilee Professorship by the Bengaluru-based Indian Academy of Sciences. She is the first woman to have received the prestigious accolade. 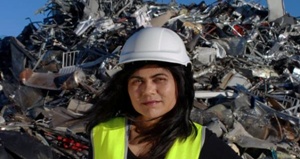 The Indian Academy of Sciences was founded in 1934 by Nobel Prize-winning physicist Sir C V Raman and it celebrated its platinum jubilee in 2009, to mark which the Council of the Academy  instituted the Jubilee Professorship.

Professor Sahajwalla is at present working on a mission to deal with the crisis of e-waste in India. She is piloting micro-factories to turn unwanted electronics into valuable metal alloys. These factories promise a safe new way for poor communities around the country to generate an income from the production of metal alloys.

She is also famous as the inventor of the innovative Polymer Injection Technology which converts old rubber tyres into metal alloys that make 'green steel'. The process gained wide popularity as a possible solution for the growing problem of disposal of waste tyres globally.

The distinguishing feature of the Professorship is that it offers the holder an opportunity for interactions and exchanges with students, researchers and teachers in several parts of India. It takes forward the Academy's aim of promoting progress and upholding the cause of science throughout the country.

''India urgently needs a safe, low-cost recycling solution for e-waste. Our approach is to enable every local community to transform their e-waste into valuable metal alloys, instead of leaving old devices in drawers or sheds, or sending them to landfill,'' says Prof Sahajwalla.

India is the fifth-largest producer of e-waste in the world with around 18.5 lakh tonnes of it heading for landfill every year. With more people using phones and computers, e-waste is becoming a rising problem for the country.