Till his death on Monday, Netaji Subhash Chandra Bose's driver and aide Nizamuddin refused to believe that Netaji died in an air crash. "How could he have died in 1945 when I dropped him on the banks of Sitangpur near Burma Thailand border about three-four months after the said crash," Nizamuddin had wondered when The Times of India interviewed him a few years ago at his village. 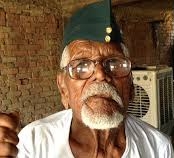 Nizamuddin died on Monday at the age of 117. His passing away was condoled by Prime Minister Narendra Modi, among many others.

"Yeh sab ek propaganda netaon dwara kiya gaya ki Netaji air crash mein maare gaye. Sach to yeh hai ki azadi ke waqt Netaji bhi maujood the (It's a rumour ... he was alive at the time of Independence)," he had said. He believed that Bose lived in Faizabad in the guise of Gumnami Baba.

It was the happiest moment for Nizamuddin in September 2015 when the Bengal government declassified files related to Netaji Subhash Chandra Bose, suggesting that he might have been alive after 1945. "The claim of my father that Netaji was not killed in air crash got a boost from the facts surfacing from declassification of files," said Akram.

Nizamuddin's claim was never taken into account by the commission and committees constituted to solve the supposed mystery over Netaji's death. Akram said his father felt that his claim was vindicated. His wish was to see Netaji's mystery solved in his lifetime.

A close aide of Bose, Nizamuddin spent four years with him after joining the INA in 1942. He said that he drove a 12-cylinder car, which was gifted by the Malaya king to Bose. Nizamuddin had turned emotional while paying tribute to his master at a programme held at Mahatma Gandhi Kashi Vidyapith on the 117th birth anniversary of Bose.

He claimed being present at a function in Rangoon when women weighed Netaji against 27 sacks of ornaments. Nizamuddin worked for the British Army for several years.

It was Netaji's call to up root the British that made him join the Indian National Army formed by Bose. After joining INA he changed his name from Saifuddin to Nizamuddin as he worked as secret agent.

He had also faced bullets to save Bose's life.