Journalist Dilip Padgaonkar, ex-editor of The Times of India, passes away

Former editor in chief of the Times of India Dilip Padgaonkar passed away on Friday morning in Pune. He had been ailing for some time. 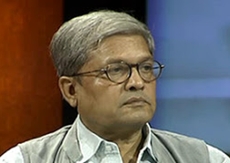 Padgaonkar was born in Pune in 1944. He matriculated from St Vincent's High School and graduated from Fergusson College, Pune. Later he did a doctorate in humanities from the Sorbonne in France in June 1968 before taking up journalism.

He worked as the Times of India's Paris correspondent and served in various capacities before being appointed its editor in 1988. He held the post for six years. He returned as executive managing editor in 1998 and retired in 2002. Thereafter he continued with ToI in a consulting capacity.

In October 2010, he was nominated on a three-member panel of interlocutors for a dialogue with people and politicians of Jammu & Kashmir.

On twitter, former Jammu & Kashmir Chief Minister Omar Abdullah recalled the many conversations he had with Padgaonkar. Tributes from other politicians, friends and former colleagues also poured in. Veteran journalist Sucheta Dalal remembered how he had broken the Harshad Mehta scam story in 1992, while TV anchor Rajdeep Sardesai described him as a classic liberal and a believer in the values of free speech and individual freedoms.

From 1978 to 1986, he worked at Unesco, first in Bangkok, then at its Paris HQ. He was also editor of Sharjah's The Gulf Today daily.

In 1994, he became chairman of the Asia-Pacific Communications Associates, a multimedia organisation active in news and current affairs on TV and in print journalism. He founded Biblio: A Review Of Books and was its editor.

Padgaonkar served on international bodies including The Indo-French Forum, The Nehru Memorial Museum and Library Society, The South Asia Free Media Association, The Prince Claus Fund of the Netherlands and The Observer Research Foundation.

In April 2002 he was honoured with the Legion d'Honneur, France's highest civilian distinction, for his services to journalism.

S B Mujumdar, founder and president, Symbiosis, and chancellor, Symbiosis International University, who had taught Padgaonkar when he was studying in Fergusson, said, "After retirement when he settled in Pune, we started meeting at various functions and since he was so closely associated with (late cartoonist) R K Laxman, we gave him the responsibility of the R K Laxman Chair that was established at Symbiosis. He had studied the Kashmir issue and would deliver lectures on the subject at Symbiosis and also in other institutes in Pune."