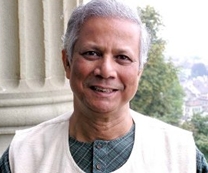 Delivering the first of a series of Nobel laureate lectures to mark the centenary celebrations of the University of Mysore, Yunus said the present model of growth was highly unsustainable environmentally besides being unequal, in which 99 per cent of the world's wealth was concentrated in 1 per cent of the population.

''Human ingenuity should be unleashed to achieve the three zeros to create a better world,'' he said.

He called for tapping the spirit of entrepreneurship latent in every person to solve the problems of poverty.

"Human beings are born free with a spirit of entrepreneurship but economics has created a distortion in which people have been reduced to cattle and are seen as mere numbers as labour," Yunus said.

In his lecture on the topic "Redesigning Economics to Redesign the World", he also noted that the present education system does not kindle the spirit of entrepreneurship in students. but rather renders them job-seekers.

He said poverty was a creation of systems and a denial of opportunity for people to grow and the economic framework was like a mould which had to be changed to create a new world.

Yunus also shared his experience about building Grameen Bank that disproved the notion that the dispossessed were not creditworthy, and about helping the children affected by night blindness.

He lamented that profit was the only driving force and making money was considered a virtue in the modern world and added that he believed that making other people happy was the most important value.