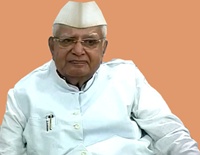 "I have accepted that Rohit Shekhar is my son. The DNA test also proved he is my biological son," Narayan Dutt Tiwari said in an interview with NDTV, his first ever public acknowledgement of Shekhar and his mother Ujjwala Sharma.

Both Shekhar and his mother were present at the interview; but despite repeated friendly gestures from his son and prompting from the mediator, Tiwari hardly looked at the man sitting beside him or at the mother seated opposite.

The 89-year-old Congress loyalist has been three times the chief minister of Uttar Pradesh, and once the CM of Uttarakhand. He was also once the governor of the troubled Andhra Pradesh, now to be divided into two states.

The admission comes a few days after the Delhi High Court rejected Tiwari's plea that the paternity dispute be resolved through mediation. Ujjwala Sharma refused to agree to this, reiterating that they were not after property or gains but merely wanted acknowledgement of his fatherhood.

"When the DNA report came, it became clear he is the father," said Ujjwala. "He could have arrived at a compromise then, but decided to move the court again."

On Sunday night, Tiwari had invited Rohit to his guest-house in Delhi and spoke to him for the first time in years, reportedly telling him that he was tired of fighting. He had fought his son all the way to the Supreme Court before finally acknowledging that the evidence against him was overwhelming.

Shekhar went to court against Tiwari in 2008, claiming he was born out of an affair between him and his mother. He said he only wanted to be acknowledged by the man who attended his birthday parties and played with him when he was a child.

The Delhi High Court is still hearing the case, but Rohit says he has got what he wanted and will bring it to the court's notice.

In 2012, Tiwari was forced to give samples of his DNA for a paternity test after warnings by the Delhi High Court, which even authorised the police to enforce its order. He moved Supreme Court against the test but failed to stop it (See; Paternity case: SC allows use of force to get Tiwari's DNA sample).

"What my mother and I went through ... the scars, the pain, I don't want anyone else to go through. I hope we can heal the wounds," said Rohit.

Describing his and his mother's trauma, he said in course of the battle, he suffered a heart attack and developed chronic insomnia.

The wounds will not go away immediately even if I pretend. But all I want now is to spend some time with him. Our case has set a precedent, and hopefully, will help others who have gone through this," he said.

Asked whether he would like to spend more time with his new son, Tiwari replied, "Why not?" Rohit says he would like to get to know his father and be with him, even if it involves helping him campaign for the Lok Sabha polls in three months.