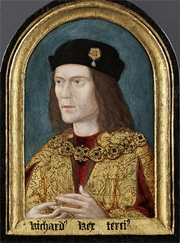 The University of Leicester, UK, confirmed  on Monday that it has discovered the missing remains of King Richard III, over 500 years after his death in battle.

At a specially convened media conference, experts from across the University unanimously identified the remains discovered in Leicester city centre as being those of the last Plantagenet king who died in 1485.

"Rigorous scientific investigations confirmed the strong circumstantial evidence that the skeleton found at the site of the Grey Friars church in Leicester was indeed that of King Richard III," a university statement said.

University of Leicester researchers have revealed a wealth of evidence – including DNA analysis, radiocarbon dating and skeletal examination - proving the identity of the skeleton.

''It has been an honour and privilege for all of us to be at the centre of an academic project that has had such phenomenal global interest and mass public appeal. Rarely have the conclusions of academic research been so eagerly awaited.''