Singapore Exchange Ltd (SGX) yesterday said that it plans to buy London's privately-owned Baltic Exchange for £77.6 million (S$139 million) and was seeking support from Baltic's shareholders for the deal. 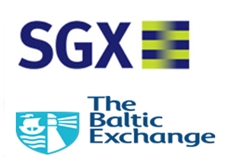 SGX is offering to pay £160.41 a share in cash and Baltic's shareholders will also receive at least £18.80 in cash as a final dividend per share, subject to approval by Baltic shareholders and conditional upon the SGX's offer becoming effective.

The Baltic Exchange said that it would consult with major shareholders to seek their support for SGX's offer.

''Subject to receiving sufficient support, and to it receiving the endorsement of the Baltic Exchange board, it is expected that a scheme of arrangement will then be circulated to shareholders and a general meeting will be announced, for shareholders to vote on an offer from SGX,'' Baltic said in a statement.

The SGX had earlier said that it will keep the Baltic Exchange's headquarters in St Mary Axe in London if the acquisition goes through, and also retain the end-user data fees charged by the Baltic Exchange at the same level for at least five years.

Founded in 1744, the Baltic Exchange provides benchmark indexes for global shipping rates and acts as a trading platform for the multi-billion dollar freight derivatives market.

It is the world's only independent source of maritime market information for the trading and settlement of physical and derivative contracts, and its information is used by shipbrokers, owners and operators, traders, financiers and charterers.

Baltic Exchange members are responsible for a large proportion of all dry cargo and tanker fixtures as well as the sale and purchase of merchant vessels.