Do Indians need to worry about the rise of the robots?

While the number of robots deployed by Indian firms has seen a 200-fold increase in the 21st century, the country still has the lowest density of robots in the world, and they are mostly deployed in jobs that are difficult or dangerous for humans 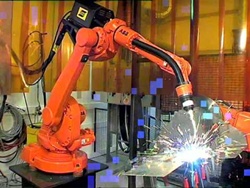 The number of robots deployed by Indian firms has seen a 200-fold increase since the turn of the 21st century. Job-seekers may find this scary till it is put in context - the total number of industrial robots in India in 2016 was 16,026, accounting for barely 0.1 per cent of India’s industrial workforce.

Moreover, most of the robots are deployed in jobs which are difficult for human beings to do, says a first-of-its-kind study on the use of industrial robots in India by Sunil Mani, professor and director at the Centre for Development Studies (CDS), Thiruvananthapuram.
Mani’s analysis based on the latest data from the International Federation of Robotics (IFR) and the Annual Survey of Industries (ASI) shows that the density of robots per 10,000 manufacturing workers has increased from less than 1 in 2000 to almost 10 in 2016.
The IFR defines an industrial robot as an “automatically controlled, reprogrammable, and multipurpose [machine]”.
The study says India has the lowest density of robots in the world although there is some underestimation of their employment in the organised sector.
A large chunk of industrial robots deployed in the country have been in the auto industry to perform two very specific tasks — arc and spot welding — which are hazardous for workers to perform. The other task where robots are increasingly being used is that of machine tending or handling, which also involves risks for human workers. Robots performing these two tasks account for 84 per cent of industrial robots deployed in the country today.
"The use of industrial robots is concentrated in two main tasks — handling / machines tending and welding and soldering. The single-largest application or task where robots are used is welding, and within it, arc and spot welding. In fact, there is a remarkable stability in the tasks where robots are used in the late 1980s and now," the study says.
India’s experience in this regard is no different from that of other countries, Mani notes. Globally, the large-scale use of industrial robots began in the 1970s in tasks related to welding, largely in the auto industry. Since then, the only other task where the use of robots has increased significantly is machine handling and tending.
The evidence so far suggests that robots are unlikely to replace all kinds of industrial workers. Rather, specific tasks within certain occupations are more likely to be automated.
The share of manufacturing sector has been rising steadily and now accounts for about two-thirds of the total operational stock of robots. Within the manufacturing industry, much of the robot installations are in four industries — automotive, electrical and electronics, metal, and chemical, rubber and plastics.
"There has been a 27 per cent increase in the number of delivered robots in 2017 compared to 2016 and on an average, it has increased by 64 per cent per annum since 2000," the study says.
However, the study sounds a note of caution. "With significant developments in artificial intelligence, robots are becoming more flexible and this may lead to automation of a number of tasks, which were previously thought to be non-automatable," it says.
While economists are still divided on how many jobs will be lost to automation in the coming years, there is fair amount of agreement that educated and skilled workers will continue to enjoy a premium even in an automated world.
MORE REPORTS