Mahindra to enter US market with fuel-efficient pickup truck

Mahindra & Mahindra is doing exactly what major Western automakers have failed to do - making fuel-efficient trucks. The Indian utility vehicles major seems to have taken over from Chrysler, Ford, GM and Toyota as the auto giants put off their small diesels in the wake of the second oil spike. 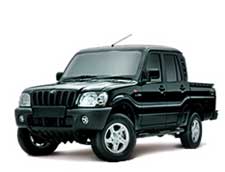 While high diesel fuel prices and bankruptcy woes hit Chrysler and GM, underdog Mahindra has steadily been pushing plans to sell its first trucks in America by the end of 2009.

The truck, tentatively called TR20 or TR40, was originally planned to be named Appalachian, with expected sales starting in the first quarter of 2009.

Mahindra has put plans for a diesel hybrid version on the backburner and instead is coming out with a high-torque, 2.2-liter four-cylinder engine and six-speed automatic transmission that's expected to be rated at least 30 mpg.

Mahindra's US distributor, Global Vehicles USA Inc, said the pick-up is capable of hauling up to 2,700 pounds and tow up to 5,000 pounds. It hopes to sell the yet-to-be-named Mahindra pick-up in the mid- to low-$20,000s.

By comparison, the two-wheel-drive, two-door Toyota Tacoma (the best-selling midsize pick-up) with a 2.7-litre four-cylinder gas engine and four-speed transmission is priced at over $16,000. The vehicle can carry only up to 1,380 pounds in its cargo box and pull a 3,500-pound trailer. The Tacoma is rated at 19/25 mpg city/highway.

The difference in price between a small-end gas truck and the Mahindra diesel could be around $9,000, but that is also significantly less than the cost of a new base model heavy duty pick-up, which can cost as much as $30,000.

While Mahindra's cost advantage may partially be because its Indian origin, the company is also tapping some of the tier-one suppliers in the US, including Bosch, AVL and Lear to cater to American tastes.