More reports on: In the news, Social media

Facebook CEO and wife pledge 99% of shareholding to charity

Facebook founder and CEO Mark Zuckerberg and his wife Priscilla Chan have promised their new-born daughter to dedicate 99 per cent of their Facebook Inc shares, currently worth about $45 billion, to a new philanthropy project focusing on human potential and equality. 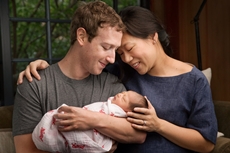 Zuckerberg made the vow in a letter to his daughter posted on his Facebook page. He also posted a photo of himself, his wife and their new daughter, Maxima, nicknamed Max, along with the  post entitled `A letter to our daughter.'

In the 2,220-word letter, Zuckerberg and Chan touched on issues including health, education, internet access and learning before announcing the Chan Zuckerberg Initiative, which aims to "advance human potential and promote equality."

They plan to give away 99 per cent of their Facebook shares over their lifetimes to advance the initiative, which was formed as a limited liability company controlled by the two.

The foundation will initially focus on curing disease, internet connectivity, community building and personalised learning - or the idea that technology can help students learn at different paces.

Maxima Chan Zuckerberg was born early last week - though Facebook did not specify her birth date. Last month, Zuckerberg announced he would take two months of paternity leave after the birth.

He said they are donating their fortune to the Chan Zuckerberg Initiative, the new foundation, because they want to make the world a better place for Max to grow up in.

The donation, amounting to $45 billion at Facebook's current value, will not, however, be made immediately, but over the course of the couple's lives.

The Facebook billionaire now joins the ranks of Warren Buffett and Bill and Melinda Gates, who have set up foundations to dedicate their massive fortunes to philanthropic projects.

Zuckerberg, 31, said he plans to remain CEO of Facebook, the world's largest online social network, for "many, many years to come," even as he takes control the new initiative.

He would sell or give up about $1 billion shares in each of the next three years, while keeping a controlling stake in Facebook, which has a value of $303 billion as of Tuesday's close.

Zuckerberg owns 4 million Class A shares and 422.3 million Class B shares of the company, which together control 10 times the voting power of all A shares, according to Facebook's most recent proxy statement.

Combined he held 54 per cent of the voting power of the company's shares.

It may be noted that Zuckerberg had, when he was 26, signed the Giving Pledge, which invites the world's wealthiest individuals and families to commit to giving more than half of their wealth to philanthropy or charitable causes over their lifetime or in their will.

"Mark and Priscilla are breaking the mould with this breathtaking commitment," billionaire investor Buffett said on Facebook. "A combination of brains, passion and resources on this scale will change the lives of millions. On behalf of future generations, I thank them."

Buffett himself had, in 2006, pledged Berkshire Hathaway Inc stock worth $31 billion at the time to Gates' foundation, which was the largest single gift at the time.

Buffett was 76 in 2006, but Zuckerberg is relatively young to commit so much of his wealth. Even Gates was 45 in 2000, the year he and his wife founded the Bill and Melinda Gates Foundation.