Actor Kamal Haasan turned politician with the launch of his political party, Makkal Needhi Maiam (MNM), at a roadshow in Madhurai, joining a select league of actors who entered active politics in Tamil Nadu. 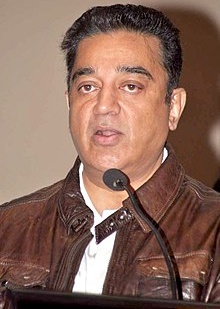 Delhi chief minister Arvind Kejriwal was present on the podium during Kamal Haasan's first day first show during which he unveiled his party flag that symbolises the party's ideology that puts people at its core.

"My party's name is Makkal Needhi Maiam (meaning justice to the people party)," the 63-year-old Haasan said at a gathering of frenzied fans and supporters.

The crowd greeted Haasan's announcement of the name of his party MNM with loud whistles, cheers and claps that almost drowed his voice.

"This is a party for the people... I am not a leader but a follower who would listen to your suggestions," Haasan said to loud cheers from the tens of thousands of people who had gathered at Madurai's grounds.

In Madurai and all along the route from Rameswaram to the temple town, there were posters depicting Kamal Haasan in different political roles in which his fans and supporters would like to see him. Some posters show Kamal Haasan as a second Dr Kalam, with the legend - Kamal is a second Kalam.

Madurai is considered as the political capital of Tamil Nadu and has a sizeable presence of Thevars, a politically significant community. It is also the place where Mahatma Gandhi adopted the loin cloth.

After a day spent traveling the 170 km from the home of his hero former President APJ Abdul Kalam in Rameshwaram and Paramakudi where he was born, Mr Haasan said he was coming back to these places after 45 years. "A little has changed, but my people have not. I am all of your son. You all have seen me as a movie star so far, from now I want you to tell that I am not a cinema star. I am the lamp of all your house. Please protect me and keep me lit," Kamal Haasan said there.

Kamal's hometown Paramakudi was originally part of Madurai till several districts were carved out of it for administrative purpose.

His party symbol on the flag – joined hands in red, white and black colour scheme - denotes unity and fight for justice for the people of Tamil Nadu, said a person from Haasan's team who did not want to be named.

''I am not a thalaiva (leader or boss), I am one among you,'' Haasan's opening remarks after unfurling the party flag sets the tone and tenor of his political messaging.

While launching his new party in Madurai, he said, Andhra Pradesh Chief Minister Chandrababu Naidu had phoned him last night to say he was a fan and would have loved to attend but was unable to.

While Aam Aadmi Party (AAP) leader Kejriwal shared the stage with Haasan, Kerala chief minister Pinarayi Vijayan sent his greeting to the actor - an endorsement of Haasan's left of centre political stance. Haasan has in the past made it clear that he will not go towards the right-wing BJP.

In his speech, Kejriwal singled out corruption and communalism as the key malaise afflicting the country and said honest leaders like Kamal Haasan can be the real alternative to well-entrenched political interests. Kejriwal firmly endorsed Haasan's party tagline ''Naalai Namadhu'' – tomorrow is ours.

Earlier, addressing his first political rally, Haasan said, ''The past will remain the past, but it will not be forgotten. How long can we keep waiting for justice?''

''Don't think, left or right, just think of people and their welfare, this is the advise Chandrababu Naidu gave me when we spoke last night,'' he told the huge gathering of fans and supporters at the Madurai rally.

''Now I have the person who has done it, won the trust of the people and working for the people, sitting beside me (Kejriwal), so I am sure I can do it, with your support for all of us,'' he said.

On the Cauvery issue, Haasan said, ''So far the politicians on either side were playing politics only. But in a genuine spirit of dialogue and give and take, it can be solved. See during Tsunami, floods and cyclone, people from Bangalore donated blood for us, what is water,'' he pointed out.

''After a full career in films, after making so much money, it is time I repaid to you the people, to the society. Which is why, I am coming into politics, not as a thalaivar, but as one among you,'' Haasan said.

Haasan who began his political journey with a breakfast meeting with the family of former president APJ Abdul Kalam in their Rameshwaram home, said he was greatly inspired by Kalam, his simplicity and humble lifestyle. He tweeted, ''glad to start my journey from a great man's simple abode''