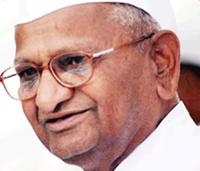 After a longish hiatus, Social activist Anna Hazare will be back on the protest path with a two-day protest at Jantar Mantar in New Delhi, starting 23 February, against the recent amendments to the Land Acquisition Act by the Centre.

The agitation will be supported by several farmers' organisations and many other social activists, including Medha Patkar.

"The two-day protest will focus on the recent anti-farmer amendments in the Land Acquisition Act made by the Narendra Modi government. Farmer organisations across the country will participate in the agitation. Medha Patkar is also expected to join the agitation," Hazare's office said.

Anna Hazare will reach the national capital on the morning of 23 February. Prior to this, he will go to Palwal in Haryana and participate in a farmers' agitation there.

This will be Hazare's first visit to the national capital after the landslide victory of his one-time confidante, Aam Admi Party chief Arvind Kejriwal.

Incidentally, the AAP too has voiced his opposition to the amendments made in the Land Acquisition Act.

"We will support Annaji's 'sangharsh'. We respect him. Whatever order he gives, I will follow it. We support his stand and his order is an instruction for us. His struggle is, however, away from political parties. Still, I will ask time from him and if he gives me time then I will certainly meet him. I request everyone to support him in his crusade," senior AAP leader Kumar Vishwas said.

On 29 December last year, the government had promulgated of an ordinance making significant changes in the Land Acquisition Act, including removal of the consent clause for acquiring land for five areas - industrial corridors, public-private partnership (PPP) projects, rural infrastructure, affordable housing and defence.