China's anti-trust regulator today said that it has conditionally approved the proposed $130-billion merger between Dow Chemical Co and Dupont, a transaction that last month received the nod from the European regulator. 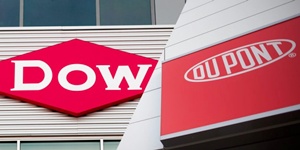 The mega merger is yet to be approved by regulators in the US, India, Brazil, Australia and Canada.

China's commerce ministry said that it has approved the merger on condition that Dupont divest its research and development department as well as assets related to pesticides and herbicides used in rice, such as metsulfuron-methyl, azimsulfuron, cyantraniliprole and chlorantraniliprole and indoxacarb.

In December 2015, both Du Pont and Dow Chemical agreed to a $130-billion merger and split into three separate publicly-traded companies focused on agriculture, specialty chemicals and material science.

Late last year, Dow Chemical Co's chief executive officer said that the closing of the deal, which was expected last year, will be delayed due to anti-trust concerns raised by regulators in several countries.

The Indian competition regulator had in March this year said in a release, "The Competition Commission of India (CCI) is prima facie of the opinion that the proposed combination between Dow and DuPont is likely to have an appreciable adverse effect on competition."

The CCI said that the proposed merger is likely to have an "appreciable adverse impact on competition," especially in agrochemicals, seeds and material science