Prime Minister Narendra Modi and his Japanese counterpart Fumio Kishida at the annual India-Japan summit talks in New Delhi on Friday “discussed ways to boost economic and cultural linkages between the two countries.” 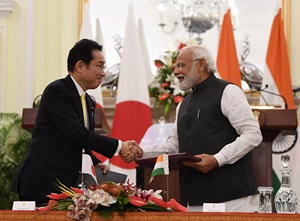 The announcement came after Japanese prime minister, who is on a two-day visit to India to participate in the 14th annual India-Japan summit, held bilateral talks with PM Modi at Hyderabad House in Delhi on Sunday.
The prime ministers reaffirmed their commitment to upholding and strengthening the rules-based multilateral trading system, with the World Trade Organisation (WTO) at its core, and to work closely with each other to achieve meaningful outcomes at the 12th WTO Ministerial Conference (MC12). They shared their opposition to coercive economic policies and practices that run counter to this system and committed to work collectively to foster global economic resilience against such actions.
They noted that since the elevation of bilateral ties to a Special Strategic and Global Partnership, there had been significant growth in economic cooperation. They expressed satisfaction that the investment target of JPY 3.5 trillion announced in 2014 has been achieved. Noting steps taken by India to improve the business environment for Japanese investors in India, as well as other measures to boost economic growth and improve ease of doing business, they expressed their shared intention to realise JPY 5 trillion of public and private investment and financing from Japan to India in the next five years, to finance appropriate public and private projects of mutual interest.
Prime Minister Modi expressed his appreciation for various initiatives taken by Japan to strengthen economic cooperation with India, including in the areas of micro, small and medium enterprises (MSME), manufacturing and supply chains.
The two prime ministers also confirmed to work together towards reliable, resilient, efficient supply chains in the region and welcomed the progress in this regard in areas such as sharing of best practices. They emphasised the importance of collaboration to address illicit technology transfers, build resilient supply chains and strengthen the protection of critical infrastructure, including through the Quad.
They welcomed the renewal of their bilateral currency swap agreement of $75 billion.
They recognised the need for enhancing bilateral trade and welcomed the amendment promoting trade of fish surimi between India and Japan under India-Japan Comprehensive Economic Partnership Agreement (CEPA). Stressing the importance of promoting trade and investment between the two countries, they encouraged further review of the implementation of CEPA through existing mechanisms. They welcomed India’s approval of imports of Japanese apples and relaxation of procedures of Indian mango exports to Japan.
The prime ministers recognised that digital technologies would play an increasingly important role in the post-COVID world and welcomed the growing cooperation under the India-Japan Digital Partnership with a view to enhancing digital economy through promotion of joint projects for digital transformation, support to provide opportunities for Indian IT professionals to work in Japan and Japanese companies, and collaboration made in the area of IoT, AI and other emerging technologies. In this regard, Prime Minister Kishida looked forward to attracting more highly skilled Indian IT professionals to contribute to the Japanese ICT sector.
They also welcomed the progress on the "India-Japan fund-of-funds” to mobilise funds for emerging Indian start-ups. Welcoming the signing of MoCs in the fields of Cybersecurity and ICT, they appreciated progress in bilateral relationship in the cyber domain and affirmed to further deepen cyber engagement with each other in multilateral fora, including in the United Nations. They shared the view to further cooperate in various fields like 5G, Open RAN, Telecom Network Security, submarine cable systems, and Quantum Communications. They welcomed the progress of bilateral cooperation in the field of science and technology, including through the holding of the 10th meeting of the India-Japan Joint Committee on Science and Technology Cooperation in November 2020, and looked forward to the joint lunar research project. They reaffirmed the commitment to strengthen the efforts so that the vision for technologies, guided by the Quad Principles on Technology Design, Development, Governance, and Use, would be further shared by all like-minded nations.
Prime Minister Modi appreciated Japan’s support for India’s socio-economic development over the years. The prime ministers welcomed the signing of the exchange of notes concerning seven yen loan projects in which Japan provides over 300 billion yen (over Rs20,400 crore) in total.
The prime ministers reaffirmed the significance of collaborative projects between India and Japan in the Indo-Pacific region. They acknowledged the progress in ongoing projects in Bangladesh and looked forward to exploring expansion of such cooperation to ASEAN, Pacific island countries and others. They appreciated the importance of their continued collaboration through the Act East Forum (AEF) for sustainable economic development of India’s North Eastern Region and for enhancing the region’s connectivity with Southeast Asia.
They welcomed the launch of the "India-Japan Initiative for Sustainable Development of the North Eastern Region of India”, which includes "Initiative for Strengthening the Bamboo Value Chain in the North East” and cooperation in health care, forest resources management, connectivity and tourism in different states of the North Eastern Region.
They highlighted their commitment to working in tandem towards a peaceful, stable and prosperous world, based on a rules-based order that respects sovereignty and territorial integrity of nations, and emphasised the need for all countries to seek peaceful resolution of disputes in accordance with international law without resorting to threat or use of force or any attempt to unilaterally change status quo. In this regard, they reaffirmed their common vision for a free and open Indo-Pacific, free from coercion.
MORE REPORTS