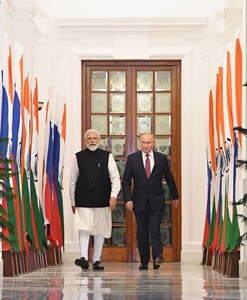 President Putin was accompanied by a high level delegation.
Foreign Secretary Harsh Vardhan Shringla said the biggest takeaways from the annual summit and the inaugural 2+2 ministerial talks were the signing of 10-year military-technical partnerships, as well as the plan to jointly produce the AK-203 assault rifles under the ‘Make in India’ initiative.
Shringla also said the supply of S-400 air defence missile systems has already begun this month and “will continue to happen”, adding that India follows an “independent foreign policy,” which is independent of the US’ Countering America’s Adversaries Through Sanctions Act (CAATSA).
India and Russia signed a total of 28 agreements on Monday. Besides  underlining its goal of becoming Russia’s defence development and production partner, India also raised Chinese aggression in Ladakh, telling Moscow that “India seeks partners who are sensitive and responsive to its expectations and requirements”.
Besides several government-to-government agreements and MoUs, commercial and other organisations from different sectors of both countries also signed a number of agreements for collaboration, reflecting the multifaceted nature of bilateral partnership.
President Putin and Prime Minister Modi met in-person in Hyderabad House in New Delhi on Monday, on the sidelines of the 21st India-Russia summit.
The leaders discussed regional and global developments, including the post-pandemic global economic recovery, and the situation in Afghanistan. They agreed that both countries share common perspectives and concerns on Afghanistan and appreciated the bilateral roadmap charted out at the NSA level for consultation and cooperation on Afghanistan. They noted that both sides shared common positions on many international issues and agreed to further strengthen cooperation at multilateral fora, including at the UN Security Council. President Putin congratulated Prime Minister Modi for India’s ongoing non-permanent membership of the UN Security Council and successful Presidency of BRICS in 2021. Prime Minister Modi congratulated Russia for its ongoing chairmanship of the Arctic Council.
The leaders underscored the need for greater economic cooperation and in this context, emphasised on new drivers of growth for long term predictable and sustained economic cooperation. They appreciated the success story of mutual investments and looked forward to greater investments in each others’ countries. The role of connectivity through the International North-South Transport Corridor (INSTC) and the proposed Chennai-Vladivostok Eastern Maritime Corridor figured in the discussions. The two leaders looked forward to greater inter-regional cooperation between various regions of Russia, in particular with the Russian Far-East, with the states of India. They appreciated the ongoing bilateral cooperation in the fight against the Covid pandemic, including humanitarian assistance extended by both countries to each other in critical times of need.
In what is called the first 2+2 ministerial dialogue between defence and foreign affairs ministers of both the countries, Russian foreign minister Sergey Lavrov and his Indian counterpart S Jaishankar and defence minister of Russia Sergey Shoigu and his Indian counterpart Rajnath Singh held talks simultaneously on Monday.
The ministers discussed a host of issues, including bilateral, regional and international issues, especially the situation in Afghanistan post-Taliban takeover, threats emanating from terror groups, protection of human rights of minorities, women and children in Afghanistan.
A joint statement titled India-Russia: Partnership for Peace, Progress and Prosperity, issued after the bilateral summit between the two leaders aptly sums up the state and prospects of bilateral ties.
President Putin extended an invitation to Prime Minister Modi to visit Russia for the 22nd India-Russia Annual Summit in 2022.
MORE REPORTS