Trump looks to make India a robust market for US exports

US President Donald Trump, arriving today on a two-day state visit to India, has set a target of making India a robust market for American producers driven by the growing India-US relations continue to grow. 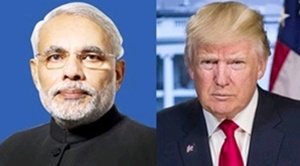 The economic dimension of bilateral relations is more important to the US.
The United States is already India’s largest trading partner, surpassing China, and bilateral trade is expected to grow further with increasing mutual engagement.
According to trade data available with the commerce ministry, bilateral trade between the US and India in 2018-19 stood at $87.95 billion, become India’s top trading partner, showing greater economic ties between the two countries.
Against this, India’s two-way trade with China during the period totalled $87.07 billion.
Similarly, during April-December 2019-20, bilateral trade between the US and India stood at $68 billion. It stood at $64.96 billion with China in the same period.
India, already the fifth largest economy, could become the third largest in a decade, and possibly, the second largest by 2050. This prospect, which makes India’s huge market and talented human capital a great economic prize, will continue to drive India-US ties.
While the China factor will continue to play a role in US’s external trade, because of its size and capacities, India is the only other country in Asia for US to depend on as a reliable export market that can counter China.
With China bent on its goal of replacing the US as top global power by 2049, India is the only market that America can bet on. India is not seeking to rival the US, it does not systematically steal technology from the US or threaten its cybersecurity.
India wants to reform the current global political and economic order, so as to have more say in international governance.
It will be the defence-military and energy ties that give the much-needed boost to India-US bilateral trade. Defence ties with the US will continue to expand through institutional arrangements such as Logistics Exchange Memorandum of Agreement, Communications Compatibility and Security Agreement (Comcasa), the Industrial Security Annex, Strategic Trade Authorization-1 (STA-1), Major Defence Partner status, the proposed Basic Exchange and Cooperation Agreement (Beca), and a revamped Defence Technology and Trade Initiative (DTTI).
It will all depend on how the two countries address areas of divergence on trade and investment issues at a time when the World Trade Organization (WTO) remains a weakened organisation.
Agriculture is perhaps the weakest link in India-US trade and India remains cautious in agricultural trade negotiations with the US, which seeks to preserve its bio-engineering edge and state subsidy system.
At the same time the US administration is closing its market for India’s farm goods and industrial products. India is a major exporter of steel, steel products and aluminium products with combined exports of $22.7 billion last year.
Local interests, including US policies related to Pakistan, Afghanistan Iran or West Asia will also have a bearing on bilateral trade.
MORE REPORTS