India and Brazil on Saturday signed 15 agreements to deepen cooperation in defence and security, trade and investment, agriculture and energy, civil aviation, energy, environment and health and innovation 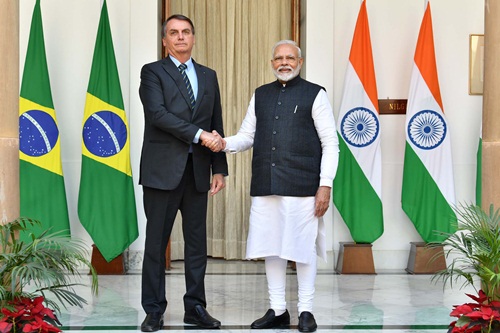 The agreements followed talks between Prime Minister Narendra Modi and Brazilian President Jair Bolsonaro who was also the chief guest at Sunday’s Republic Day parade.
Brazil is the largest country in Latin America covering nearly half of South America and, by building up relations with Brazil, India will be a major boost to its relations with Latin American countries.
The two countries signed 15 agreements covering a wide range of areas, including bio energy, oil and gas, mineral resources, traditional medicine, animal husbandry, trade and investment.
The major focus was on boosting bilateral trade and investment as both the large economies have been hit by economic slowdown. India and Brazil also drew up ambitious plan to boost their stuttering economies by expanding trade and set a target of $15 billion in bilateral trade by 2022.
Bilateral trade between India and Brazil in 2018-19 was $12 billion which included $8 billion worth of Indian exports to Brazil and $4 million as imports by India.
The two leaders see great synergies between India and Brazil, the two large economies with a combines GDP of around $4.5 trillion and having a total population of 1.5 billion.
“Your visit to India has opened a new chapter in ties between India and Brazil,” Modi said. Tweeting later, Modi said, “Apart from bilateral cooperation, India and Brazil are working together at various multilateral forums. We see immense synergies on various issues including the need to uproot the menace of terrorism. India and Brazil will keep working together for a better planet.”
The two countries signed a memorandum of understanding (MoU) on cooperation in the field of bioenergy besides co-operation in the field of petroleum and natural gas.
An investment cooperation and facilitation treaty b/w the Republic of India and the Federative Republic of Brazil
The two countries signed an agreement on mutual legal assistance in criminal matters. They also signed agreements on cooperation in the field of health and medicine and in the field of early childhood.
India’s ministry of AYUSH and Brazil’s ministry of health signed an agreement on cooperation in the field of traditional systems of medicine and homeopathy.
India and Brazil also announced a cultural exchange programme Brazil for the period 2020-2024.
The two countries entered into an MoU on cooperation between the Indian Computer Emergency Response Team (CERT-In) of the ministry of electronics and information technology (MEITY) and the General Coordination of Network Incident Treatment Centre, Department of Information Security, Institutional Security, Cabinet of the Presidency of the Federative Republic of Brazil (CGCTIR/DSI/GSI) on cooperation in the area of cyber security.
India and Brazil will also announced a programme of scientific and technological cooperation for implementing the agreement on scientific and technological cooperation during 2020-2023.
India’s Geological Survey of India (GSI) and CPRM of Brazil’s ministry of mines and energy.
An MoU was signed between Invest India and the Brazilian Trade and Investment Promotion Agency (Apex Brazil) for mutual investment promotion.
A joint declaration of intent between India’s Department of Animal Husbandry and Dairying and Brazil’s ministry of agriculture, livestock and food supply aims at a big boost to cooperation in the fields of animal husbandry and dairying.
MORE REPORTS