Negotiations to seal a mega deal to create the world's largest free trade area deadlocked on Monday with China playing hardball and India insisting on meeting its demand for amicable resolution of market access and tariff related issues. 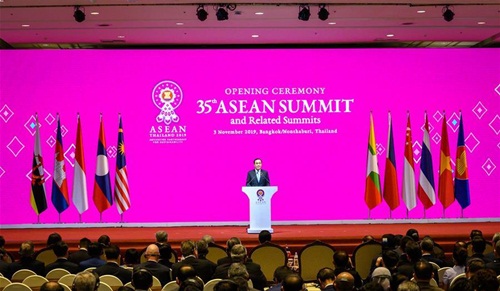 While some countries raised the possibility of a no deal summit, hosts Thailand said on Monday that the talks were conclusive and that there would be an announcement of success at the summit in Bangkok despite doubts raised by India.
The China-backed 16-nation Regional Comprehensive Economic Partnership (RCEP) was spurred more by the US-China trade war, and China-backers in the negotiations were hoping to announce at least a provisional agreement on what could be the world's biggest trade bloc.
But India’s insistence that its demands, ignored for long by negotiators, be resolved amicably, unsettled plans of China-led caucus to hammer out a deal at India’s expense.
RCEP includes the 10-member grouping of Southeast Asian nations, as well as China, South Korea, Japan, India, Australia and New Zealand.
While diplomats from countries supporting China rooted for a deal on the long-overdue RCEP, they failed to make a breakthrough ahead of Monday's summit meeting among the grouping's leaders.
The RCEP will now have to wait perhaps until at least 2020 to finalise a deal.
Meanwhile, the Association of South East Asian Nations (ASEAN) has endorsed India’s vision of equitable growth in the Indo-Pacific region amidst growing Chinese assertiveness and territorial disputes in the strategically important region.
The ASEAN-India summit on the sideline of the 35th ASEAN summit in Bangkok vowed to further broadbase strategic ties between the two sides with a combined GDP of $5 trillion, and deal with major challenges like terrorism collectively.
Addressing the annual India-ASEAN summit, Prime Minister Narendra Modi talked about the mutual coordination between India’s vision of the Indo-Pacific and ASEAN Outlook for the strategically key region, which has been witnessing growing Chinese assertiveness.
Modi also talked about cross border terrorism, spread of violent extremism and the situation in the South China Sea, and underlined the need for greater cooperation between India and the ASEAN (Association of Southeast Asian Nations) to unitedly confront major challenges facing the region.
The endorsement of India’s stance assumes significance as it came in the midst of geo-political power play in the Indo-Pacific region and escalating territorial disputes between China and a number of ASEAN countries.
In a significant indication of India’s rising profile, the 10-nation ASEAN on Sunday clearly appreciated New Delhi’s growing role in the Indo-Pacific region as the two sides, with a combined GDP of $5 trillion, vowed to further broadbase strategic ties and deal with major challenges like of terrorism collectively.
“I welcome the mutual coordination of the Indo-Pacific Outlook between India and the ASEAN. India’s Act East Policy is an important part of our Indo-Pacific vision. The ASEAN is and always will be the heart of our Act East Policy. Integrated, organised and economically developing ASEAN is in India’s basic interest,” Modi said.
Officials said the biggest takeaway from the 16th India-ASEAN summit was acknowledgement of the ASEAN leaders about India’s growing role in the Indo-Pacific for the first time after the bloc came out with an “Outlook” for the region.
The endorsement of India’s role assumes significance as it came in the midst of geo-political power play in the Indo-Pacific region and escalating territorial disputes between between China and a number of ASEAN countries.
“All the ASEAN countries appreciated India’s growing role (in the Indo-Pacific) region and that India’s growing role is a factor of peace and stability in the region. That is the broad approach of the ASEAN,” said Vijay Thakur Singh, secretary (East) in the ministry of external affairs.
Earlier, Chinese Premier Li Keqiang said his country was ready to work with ASEAN countries to ensure peace, security and stability in the South China Sea.
Singh said the issue of South China Sea was discussed at the summit and it was noted by both sides the importance of promoting a rules-based order in the region including through upholding adherence to international law.
In his address, the prime minister said India is committed to further strengthen partnership with the ASEAN through stronger surface, maritime and air-connectivity and digital-link.
“$1 billion line of credit will be useful for physical and digital connectivity. Our intention is to greatly increase the traffic of people for study, research, trade and tourism. To achieve this goal, India is ready to increase partnership with the ASEAN in the area of mutual interests,” he said.
Modi said India is also ready to further increase capacity building and partnerships in areas of agriculture, science, research, ICT and engineering.
“I welcome the recent decision to review the ASEAN-India FTA. This will not only make our economic relations stronger, but our trade will also be balanced. We also want to strengthen our partnership in the areas of maritime security and blue economy,” he said.
The prime minister also announced that India would be looking at creating an endowment of Rs50 million for promoting exchanges between faculty as well as students under India-ASEAN network.
Singh said the ASEAN leaders spoke of India as a long-term friend and a dynamic partner and complimented India’s contribution in the peace and stability of the region. The leaders also welcomed India’s support to the centrality of the ASEAN and India’s programmes and projects which support ASEAN master plan for connectivity.
“They expressed keen interest in enhancing partnership maritime and cyber domains,” said Singh.
The 10-nation ASEAN is considered one of the most influential groupings in the region. India and several other countries, including the US, China, Japan and Australia are its dialogue partners.
The ASEAN region along with India together comprises combined population of 1.85 billion people, which is one fourth of the global population and their combined GDP has been estimated at over $5 trillion.
MORE REPORTS