US and India near trade deal, says Nirmala Sitharaman

In signs that India may not sign the Regional Economic Cooperation Pact (RECP), which is heavily loaded in favour of China, union finance minister Nirmala Sitharaman has said that negotiations between India and the US on a trade deal are going on “full speed” and that she expects an agreement to be signed soon. 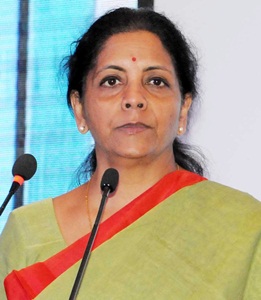 Nirmala Sitharaman is in the United States to attend the annual meeting of the International Monetary Fund (IMF) and World Bank.
“In fact, I broadly mentioned it to Secretary Mnuchin (US Treasury Secretary Steven Mnuchin), but that is something on which the commerce minister and Mr Lighthizer (US Trade Representative Robert Lighthizer) are working,” Sitharaman said on Saturday.
“My inputs are that the negotiations are going in full speed and there is a great intensity with which both sides are engaging and hopefully the deal will be struck soon,” she said.
Sitharaman was speaking to a group of Indian reporters after her interactions at the annual meeting of the IMF and the World Bank in Washington DC.
The ongoing trade deal negotiations briefly came up for discussion during a pull-aside between Sitharaman and Mnuchin at the IMF headquarters. Mnuchin is scheduled to visit India early next month.
The finance minister said India has not faced the brunt of the global slowdown as much and other economies.
“…I’m saying with a sense of responsibility that global economic slowdown and estimates about growth for the next year are largely pegging on India’s and China’s growth estimates, in the sense, on their performance depends rest of global growth also..”
“That is the kind of picture that you get when you look at these two charts which go into the details of how the slowdown whilst affecting the rest of the world in a particular fashion, at least in India and China the slowdown is not so bad,” she said.
“In fact, when you talk about next year, the impact of India’s growth is much better than even that is shown of China’s. I am not doing the comparisons,” she added.
The Indian economy is battling a severe slowdown with the economy growing at 5 per cent in the three months ended June, on the back of a big slump in private consumption expenditure to a 4-1/2 year low of 3.1 per cent.
India’s industrial output also contracted 1.1 per cent in August, its worst show in over 6-3/4 years, further deepening of the economic downturn.
Ahead of the release of IMF’s World Economic Outlook, the Fund’s new chief Kristalina Georgieva had said at the autumn meetings that the global economy is witnessing “synchronised slowdown” and its effect is “more pronounced” in emerging markets like India.
IMF, in its latest WEO said that India should opt for further monetary policy easing and broad-based structural reforms to reverse a cyclical demand slowdown while slashing its growth projection for the country to 6.1 per cent for the current fiscal from its July forecast of 7 per cent.
“In India, growth softened in 2019 as corporate and environmental regulatory uncertainty, together with concerns about the health of the non-bank financial sector, weighed on-demand,” IMF said in its biannual World Economic Outlook (WEO).
IMF chief economist Gita Gopinath told reporters that the government has taken appropriate steps but it needs to do a lot more, including cleaning up the balance sheets of commercial banks, to ward off the negative impact on growth from financial vulnerabilities.
“On the fiscal side, there have been some recent measures, including the corporate tax cut. There has been no announcement on how that will be offset through revenues at this point. So, the revenue projections going forward look optimistic. But it is important for India to keep the fiscal deficit in check,” she added.
She said a totalisation agreement with the US has always been on the cards.
“One of the reasons why that was never responded to was that India did not have a social welfare net or social insurance cover for Indians in India. And therefore, if they had to give it, they wouldn’t be given in the sense where would it be used,” she said while responding to a question.
“Today, I think most private insurances or for many of the families which are below the certain level of income, Ayushman Bharat is a fantastic big coverage. There is also now a lot more private sector option for insurance coverage. So whether that has been factored in now in the negotiations on this particular thing, I’m not adequately informed,” Sitharaman said.
She said India in the past, even when she was the commerce minister, had put several arguments before but that was repeatedly stonewalled over the health cover issue.
“I remember that. I’ve heard it at least twice in my negotiations on the totalisation,” Sitharaman said. It could be “humongous amounts”, she added.
Most of the Indians working in the US, unfortunately, have no claim over their social security deductions, because there is a minimum period of at least 10 years, she said.
“It’s so designed that you really can’t benefit. And no one, in any case, does live for that duration in this country,” she said An official release issued said Sitharaman had a “fruitful” dialogue with Mnuchin.
The two sides agreed to continue the dialogue in the first week of November during Mnuchin’s visit to New Delhi, it said.
MORE REPORTS