Prime Minister Narendra Modi on Sunday showered praise on the US President for his leadership qualities even as he tore into India’s detractor Pakistan, saying India and the United States are united to fight terror. 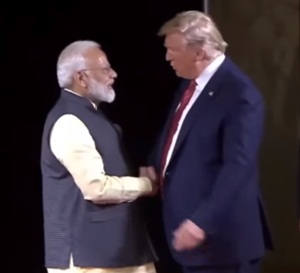 The prime minister was speaking at the 'Howdy Modi' event at NRG stadium in Houston, Texas where he shared the dais with US President Donald Trump.
Addressing the 50,000-strong gathering, which included Indian Americans in large numbers, Modi called it an honour and privilege to welcome Donald J Trump to the Howdy Modi event. The prime minister said the US President has left a deep and lasting impact everywhere.
He said that every time they met, he felt the friendliness, warmth and energy of Donald J Trump, even as he tore into India’s detractor Pakistan.
In his 50-minute address, Narendra Modi touched upon India’s strengths, including its demography, diaspora, diversity, democracy, economy, the process of modernisation underway in Indian society, and its responsible track record as an actor in the international arena.
Modi also interacted with representatives of different sections of people, both inside the NRG stadium and outside, including Democrats, the Indian-American community, while hitting out detractor Pakistan.
Modi also quietly brought up the recent scrapping of Article 370, which downgraded not just Kashmir’s constitutional position but also its status in the Indian Union. “Now Kashmiris can enjoy the same rights that are given to the rest of India by the Constitution,” Modi said.
Both Modi, and his external affairs minister S Jaishankar, however, were clear in their views that while relations with the US is crucial to helping India meet its own economic and strategic aspirations, it does not mean accepting every US demand, but it does mean having constructive and warm ties and arresting any drift that may crop up in the relationship.
Addressing the 50,000-strong gathering, the prime minister said that new history and new chemistry are being made at the venue in Houston. “The presence of Donald Trump and the senators talking about India's progress is a respect to the achievement of the 1.3 billion Indians”, he said, adding that the energy at the stadium showed the increasing synergy between India and United States.
“The name of this event is Howdy Modi. But Modi alone is nothing. I am a person working for the wishes of 130 crore people in India. So when you ask - Howdy Modi, I would say all is well in India,” the prime minister said. He also repeated “Everything is fine” in multiple Indian languages, to drive home the point that India’s unity in diversity is the strength of our vibrant democracy.
“Today, India is determined and working hard towards creating a New India”, PM said. He said that lots of efforts are being provided to build a new and better India.  “India is not putting off challenges, we are taking them head on. India is not going for incremental changes, we are working on creating permanent solutions, and making impossible possible”, PM said.
Highlighting the achievements of NDA government in the past five years, the prime minister said, "In the last five years, 130 crore Indians have achieved things which no one could have even imagined. We are aiming high, we are achieving higher". He mentioned about the transformational action done by his government in providing gas connections to households, improving rural sanitation, creating rural road infrastructure, opening of bank accounts etc.
Prime Minister reiterated the commitment of his government towards ‘Ease of Living’ and ‘Ease of Business’. He outlined the various initiatives undertaken by the government for ensuring ‘Ease of Living’, including removal of obsolete laws, ensuring faster delivery of services, cheap data rate, strong action against corruption, rolling out of GST etc. He said that under his government development will reach each and every Indian.
Speaking about the abrogation of Article 370, PM asked the gathering to give standing ovation to the parliamentarians for taking such a decisive strong action. He said that Article 370 had kept people of Jammu and Kashmir and Ladakh away from development and progress. “Now people of Jammu &Kashmir and Ladakh have the same rights as every Indian,” the PM said.
He said the time has come for tough decisive fight against terrorism and those who support terrorism. He praised President Trump’s resolve in fighting against terrorism.
Prime Minister extended an invite for President Trump and his family to visit India. “Our friendship will give new heights to the vibrant future of India and the United States,” Modi said.
Commenting Prime minister Narendra Modi’s premiership, Donald Trump said the Indian prime minister is doing an exceptional job for India and its citizens. He congratulated Modi for his unprecedented election victory. He added that the relationship between India and United states are better than ever.
Hailing the prime minister’s pro-growth policies, Trump said, “India has lifted nearly three hundred million people out of poverty under Prime Minister Narendra Modi’s leadership. That is incredible”. He said, under Prime Minister Narendra Modi’s leadership, the world is witnessing a strong, thriving Republic of India. The President thanked the Indian community for their contributions and said that his administration is committed towards the betterment of the community.
Welcoming Prime Minister Modi to Houston, House Majority leader StenyHoner said that the United States is inspired by modern India. He said that Prime Minister Modi leads the nation while being mindful of the challenges, undeterred as India reaches into a new frontier of space and equally determined to lift millions out of poverty back on earth.
Earlier, Mayor of Houston Sylvester Turner presented the 'Key to Houston' to Prime Minister Narendra Modi as a mark of respect, solidarity and long standing India-Houston relationship.
MORE REPORTS