Prime Minister Narendra Modi on Tuesday said he looked forward to discussing regional and international issues of mutual interest with Russian President Vladimir Putin during his visit to Vladivostok to attend the Eastern Economic Forum. 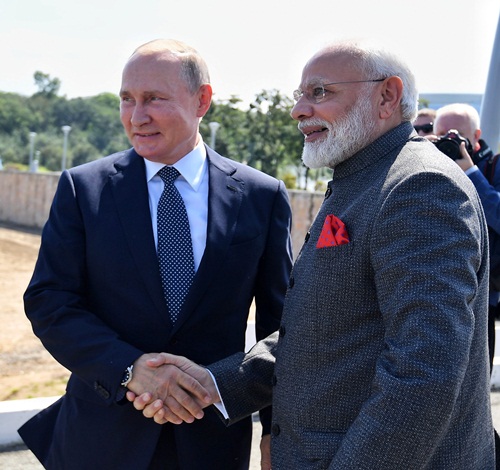 He also said his visit to the Russian Far East Region, the first by an Indian prime minister, underlined the desire of the two countries to diversity and further strengthen bilateral relations.
With the slackening of Russian economy, Moscow is shifting focus from the nation's European side to the far-east. The Far Eastern Federal District, which is twice the size of India, is rich in resources but has a population merely 8 million. It is also vastly underdeveloped. Russia needs the help of Asian countries to develop the vast areas. So far, china has been the main investor in Russia’s vast Siberian province. Russia is keen to bring new investors other than China into its Pacific region.
The resource-rich region provides ample opportunities for India, an energy-hungry nation. India could also provide Russia with much-needed labour for projects in the sparsely populated region. By investing in far-east, Indian companies also get access to a market where it doesn't compete with Western firms. Both the countries are also looking at opportunities to explore hydrocarbons on the continental shelf in the Arctic and the Russian far-east together.
The economic interests of both New Delhi and Moscow align in the matter of Asia-Pacific security as well, according to India’s foreign minister S Jaishankar.
Ahead of his departure to Russia, Prime Minister Narendra Modi said, "I look forward to discussing with my friend President Putin the entire gamut of our bilateral partnership as well as regional and international issues of mutual interest," the prime minister said in his departure statement ahead of his two-day visit beginning Wednesday.
In Vladivostok, Modi will participate as the chief guest at the 5th Eastern Economic Forum at the invitation of President Putin.
He will also hold the 20th India-Russia Annual Summit with Putin.
"I also look forward to meeting other global leaders attending the Eastern Economic Forum, and interacting with Indian Industry and business representatives participating in it," Modi said.
The forum focuses on development of business and investment opportunities in the Russian Far East Region, and presents enormous potential for developing close and mutually beneficial cooperation between India and Russia in the region, he said.
"Our two countries enjoy excellent relations, based on the strong foundation of our special and privileged strategic partnership. Both countries cooperate extensively in the strategic fields of defence, civil nuclear energy and peaceful uses of space. We have robust and growing trade and investment relations.
"Our strong partnership is complemented by a desire to promote a multi-polar world and the two countries closely cooperate towards this end in regional and multilateral fora," Modi said.
Reports said Russia and India are also likely to have an agreement for production of spare parts for Russian-origin military equipment in India.
The manufacturing of assault rifles and military helicopters in India will be among the top items on agenda when Prime Minister Narendra Modi and Russian President Vladimir Putin hold a bilateral meeting in Vladivostok later this week, a report in The Economic Times stated.
The report adds that the two nations are likely to discuss the Indo Russian Rifles Private Limited (IRRPL) JV for production of AK 203 assault rifles at Korwa, Uttar Pradesh.
The venture was formed following an agreement in February. The next step will be to place an order to begin production of the assault rifle.
The discussion on the next step of ordering light weight helicopters to India Russia Helicopters Limited (IRHL) for the Indian Army and the Air Force will be high on agenda. IRHL was established in 2015.
The Rs20,000-crore deal to set up a production line in India to manufacture over 200 helicopters for the India’s defence forces, and the transfer of technology is being processed, the report adds. Technical details have been finalized with Hindustan Aeronautics Limited (HAL) - the prime contractor.
The report also said the defence ministry is processing a tender for production of 6.7 lakh rifles at the Korwa production unit. It is also keen that all indigenisation of the weapons is achieved as the venture will also focus on exports to friendly nations.
Russia and India are also likely to have an agreement for the production of spare parts for Russian-origin military equipment in India. This is likely to be done under a joint venture framework, the report suggests. The venture will produce spare parts for all equipment, including those for aircraft, navy ships and land-based fighting units.
MORE REPORTS