Modi,Trump discuss trade, defence and 5G ahead of G20 summit

Prime Minister Narendra Modi and US President Donald Trump today discussed several bilateral and global issues including trade, Iran and 5G communications on the sidelines of the G20 meeting in Osaka, Japan. 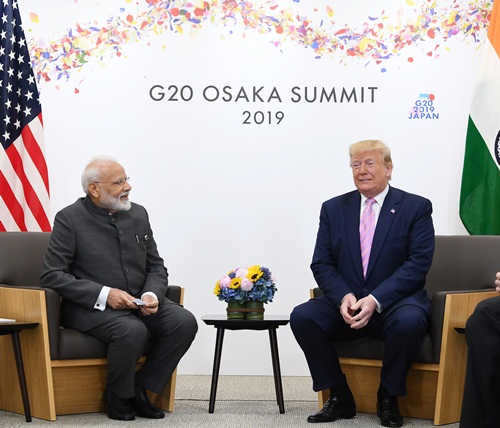 "We have become great friends and our countries have never been closer", President Trump told PM Modi amidst increasing friction over trade and military ties with other countries. The US President also said the two countries will "certainly work together on trade", a subject that the US considers as a major source of friction between the two nations.
Ahead of his meeting with PM Modi, President Trump had called for for the withdrawal of retaliatory tariffs imposed by India, saying it was "unacceptable".
New Delhi had slapped tariffs on 28 US products earlier this month after Washington withdrew long-standing trade concessions under the Generalised System of Preferences (GSP) to India on 1 June.
The prime minister's bilateral meet with the US President is crucial as the two nations seek to make a breakthrough in their ongoing trade dispute, and Trump said he is hopeful.
"We have become great friends and our countries have never been closer. I can say that with surety. We will work together in many ways, including military, we''ll be discussing trade today," Trump said as he sat down with PM Modi.
In a tweet yesterday, President Trump had said India's imposition of retaliatory tariffs was "unacceptable" and called for its withdrawal. He had said he was looking forward to discuss the issue with PM Modi in today's talks.
Government sources, in response, told news agency Reuters that India's tariffs are not as high as other developing countries. Commerce and Industry Minister Piyush Goyal maintained that the central government will not allow trade negotiations to overtake "issues of national interest".
Foreign secretary Vijay Gokhale said the two leaders did not discuss India's $5-billion deal with Russia for S-400 air defence systems. The US has demanded cancellation of the military deal with Russia, warning it of risk of US sanctions.
Earlier, foreign Minister S Jaishankar had, in his meeting with secretary of state George Pompedeo, said that India will be guided by its own national interests on the matter. New Delhi wants the US to overlook the $5 billion deal, which it considers crucial for its defence.
During the talks Trump congratulated Modi on his stunning win in the national election and pulling together undecided electorate.
"It was a landslide election, great election. It was a big victory, you deserve it... Fantastic tribute to you and your abilities. You've done a great job in pulling everybody together," he told PM Modi. "I remember when you first took over, there were many factions and they were fighting with each other and now they get along," the US President said.
"On Iran, the primary focus was on how we ensure stability there, as instability affects us in many ways, not just in the matter of energy needs, but also in terms of our large diaspora in Gulf. Eight million Indians are in the Gulf," Gokhale said, while briefing reporters on the bilateral.
Much will depend on how the US president, champions his ‘America First’ policy and the Indian prime minister sticks to his `Make In India’ policy.
Before holding the one-on-one talks, PM Modi, Trump and Shinzo Abe met for the Japan-America-India trilateral. PM Modi also interacted with the BRICS (Brazil, Russia, India, China and South Africa) leaders, including Chinese President Xi Jinping and Russia's Vladimir Putin.
"Terrorism is the biggest threat to humanity. It not only kills innocents but also severely affects the economic development and social stability," PM Modi said.
PM Modi had a very warm meeting with his Japanese counterpart Shinzo Abe on Thursday and, Gokhale said, the two leaders had a "very constructive and detailed discussion" on the Indo-Japanese bilateral relationship. "They spoke about the importance of focussing on global economy," he said, adding that the Japanese prime minister also dwelt on the subject of fugitive economic offenders.
Prime Minister Narendra Modi also held a “productive” trilateral meeting with US President Donald Trump and Japanese premier Shinzo Abe, and extensively discussed issues of the Indo-Pacific region, connectivity and infrastructure development ahead of the formal opening of the G-20 Summit.
The main topic of discussion was Indo-Pacific, how the three countries can work together in terms of connectivity, infrastructure, ensuring peace and security, and working together to build upon this new concept, Foreign Secretary Vijay Gokhale said.
“Committed to a better future. Meeting of JAI (Japan-America-India) Trilateral takes place in Osaka. PM @AbeShinzo welcomes the leaders. @POTUS congratulates Prime Ministers Modi and Abe for their electoral victories. PM Modi highlights the importance India attaches to JAI,” the prime minister’s office tweeted.
“Today’s meeting of the JAI Trilateral was a productive one. We had extensive discussions on the Indo-Pacific region, improving connectivity and infrastructure development. Grateful to PM @AbeShinzo and President @realDonaldTrump for sharing their views as well,” Modi tweeted later.
“2nd ‘JAI’ - Japan-America-India Trilateral Meeting between PM @narendramodi, Japanese PM @AbeShinzo & POTUS @realDonaldTrump on margins of #G20 Summit. Discussion focused on how the 3 countries can together work together towards an open, stable & rule-based Indo-Pacific region,”  external affairs ministry spokesperson Raveesh Kumar said in a tweet.
Before leaving for Japan, PM Modi had said that the two-day Osaka summit will be an important stepping stone for India towards hosting the G20 summit in 2022, "when we usher in a New India in the 75th anniversary year of our Independence".
MORE REPORTS