Union minister of commerce and industry and railways Piyush Goyal, who is attending the G20 Ministerial Meeting on Trade and Investment and Digital Economy in Japan, has called for reciprocity in trade relations. 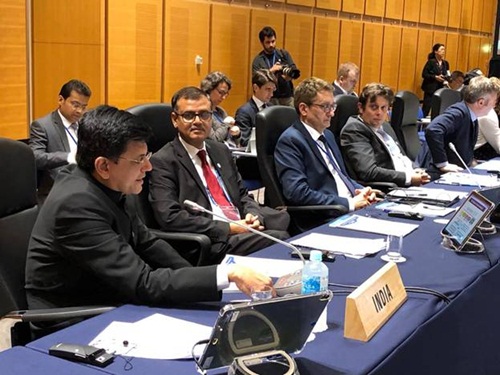 During the bilateral meetings with representatives of a number of countries on the sidelines of the two-day G20 Ministerial on Trade and Digital Economy in Tsukuba, Ibaraki, Japan on 8-9 June 2019, the commerce minister emphaised on the need for reciprocal market access for Indian goods just as other countries seek to push their products.
During bilateral meetings with host Japan and countries like the USA, UK, China, France, Singapore, Korea, Spain, Canada, EU, Mexico, Saudi Arabia, South Africa, Chile and Australia, Piyush Goyal emphasised the need for reciprocal market access for Indian products.
He said the slowdown in global trade and investment is of serious concern to all countries as it adversely affects economic growth, development and job creation. He called for de-escalating trade tensions and reviving confidence in the rules based multilateral trading system which all countries had so painstakingly created.
While India is committed to working towards building free trade, that is inclusive and development centric to bring prosperity to people around the world, focus on the imperatives of meeting the goals of SDGs, and eliminating poverty and deprivation must not be lost, he said.
He further reiterated that with the advent of digital technologies, services are vital drivers of growth. Servicification of the manufacturing sector is enhancing the importance of services in global trade. Major investment is also being driven by the service sector. Thus, we need to remove barriers and facilitate temporary movement of highly skilled professionals to sustain this investment and growth.
Goyal said another way to go about correcting this is by supporting greater participation of MSMEs in developing countries - both in domestic and global trade - because they are crucial for jobs and income generation, on which livelihood of millions are dependent. India urged G20 to provide preferential market access to MSMEs in developing countries to be part of the global supply chains.
At the end of the 2-day sessions, the commerce minister congratulated Japan for taking initiative of putting forth a forward looking agenda, of the growing interface, between trade and digital economy.
For the first time a joint session with ministers of digital economy and trade and investment was held in G20 to discuss the interface between digital economy and trade.
In his address, Piyush Goyal said there is no doubt that digital technologies are impacting our economies in a significant way and nations that fail to adapt to these changing realities run the risk of being left behind. Technologies can be disruptive if not harnessed in right time. The minister further said that concerns over loss of jobs, revenue, erosion of competitiveness are real.
The deliberations on trade, investment and digital economy will feed into the Osaka Summit Declaration, which will be adopted on 29 June 2019.
MORE REPORTS