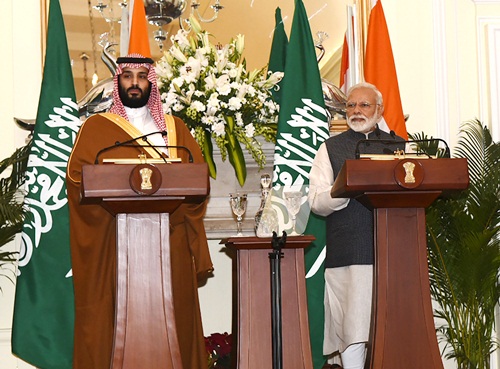 Mohammed bin Salman arrived in Delhi on Tuesday for a two-day visit. He was received by Prime Minister Modi and minister of state in the ministry of external affairs General VK Singh at the Delhi airport.
The Crown Prince had visited Islamabad on Sunday, 16 February, at the start of his South Asian tour.
Issuing a joint statement with Saudi Crown Prince Mohammed bin Salman, Prime Minister Narendra Modi today brought up the Pulwama terror attack, saying that they have agreed on the need to put pressure on countries harbouring terrorism.
"Extremism and terrorism are our common concerns. We would like to tell our friend India that we'll cooperate on all fronts, including intelligence sharing," the Saudi crown prince said later.
Mohammed bin Salman received a ceremonial welcome on Wednesday by President Ram Nath Kovind at the Rashtrapati Bhawan.
Saudi Arabia’s MoS for foreign affairs Adel al-Jubeir said that Riyadh will try to “de-escalate” tensions between India and Pakistan in the wake of the Pulwama terror attack.
Saudi Arabia and Pakistan called for avoiding “politicisation” of the UN listing regime at a time when India is stepping up its efforts to brand JeM’s Masood Azhar as a global terrorist.
The Crown Prince is expected to travel to China from India Modi, on his part, called Saudi Arabia among India's most important strategic partners. “We held extensive and successful talks, vowed to take our economic ties to a new level... The time has come to transform our energy cooperation into strategic partnership.”
The PM also welcomed Saudi Arabia for joining the International Solar Alliance and the country's investment in Indian infrastructure.
"We also discussed how to further strengthen our defence cooperation," he said.
The Congress on Wednesday slammed PM Modi for welcoming the Saudi crown prince, indicating that by doing so, the former has disrespected the martyrs and soldiers of India.
Addressing the media after the ceremonial welcome, Saudi Crown Prince Mohammed bin Salman said, “Today we want to be sure that this relation is maintained and improved for the sake of both countries. With the leadership of the President and the Prime Minister, I am sure we can create good things for Saudi Arabia and India.”
He also said that the ties between India and the Arabian Peninsula are “in our DNA," adding that he hoped the relations are maintained for the sake of both countries – Saudi Arabia and India.
The two countries also signed a number of agreements on cooperation across various fields, including investing in India’s National Investment and Infrastructure Fund; cooperation in the field of tourism; cooperation in the field of housing; framework cooperation programme between Invest India of the Republic of India and Saudi Arabian General Investment Authority.
The two countries also signed an MoU for cooperation on broadcasting between Prasar Bharati, New Delhi, India and Saudi Broadcasting Corporation (SBC), Saudi Arabia for exchange of audio visual programme.
MORE REPORTS