India has extended financial assistance of $1.4 billion to Maldives, in the form of budgetary support, currency swap and concessional lines of credit to fulfil the socio-economic development programmes of the Maldives as it transitions into a democracy. 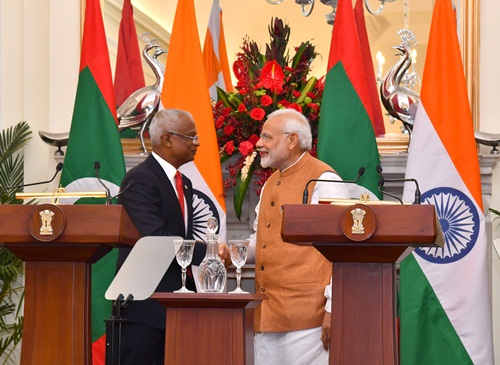 This is perhaps the biggest financial assistance yet to the new government of the Indian Ocean island nation that is grappling with debt acquired from huge Chinese loans contracted for infrastructure building by the previous government.
Prime Minister Narendra Modi announced the decision after a meeting with the Maldives’ President Ibrahim Mohamed Solih, who is on a state visit to India from 16 to 18 December.
Modi congratulated the people of Maldives for their successful and peaceful transition to democracy and applauded the President of Maldives on his vision for inclusive, decentralised, people-centric governance, and development that is sustainable.
Recalling his government’s policy of ‘Neighbourhood-First’, Prime Minister Modi reiterated India’s assurance of all possible support to Maldives in realising its aspirations for socio-economic development, and strengthening of democratic and independent institutions.
President Solih reaffirmed his government’s "India-First Policy”, and commitment to working together closely with India. He appreciated the generous assistance provided by the Government of India to Maldives, and identified various areas for developmental cooperation, including private sector involvement in development of housing and infrastructure, water and sewerage systems in the outlying islands, healthcare, education and tourism.
Both leaders emphasized the need to improve connectivity between the two countries through the establishment of enabling infrastructure that would promote the exchange of goods and services, information, ideas, culture and people.
The prime minister informed the Government of India’s decision to provide 1,000 additional slots over next 5 years for training and capacity building in diverse fields, including judicial, policing and law-enforcement, audit and financial management, local governance, community development, IT, e-governance, sports, media, youth and women empowerment, leadership, innovation and entrepreneurship, art and culture.
The two countries also announced a new agreement on visa facilitation, which will address the common concerns and ensure that people-to-people contacts are enhanced. The Maldives is one of the very few countries with which India has a visa free arrangement.
The signing of the agreement will facilitate many Maldivians who send their children to school in India, to be able to accompany them. It will also facilitate easier visa arrangements for Maldivian citizens and their families, to come to India for medical treatment. Both leaders emphasised the need to ensure seamless movement of people between both countries.
Both leaders agreed on the importance of maintaining peace and security in the Indian Ocean Region. In furtherance of the shared recognition that the security interests of both the countries are interlinked in the region, they reiterated their assurance of being mindful of each other’s concerns and aspirations for the stability of the region and not allowing their respective territories to be used for any activity inimical to the other. The two leaders agreed to strengthen cooperation to enhance maritime security in the Indian Ocean Region through coordinated patrolling and aerial surveillance, exchange of information and capacity building.
The two leaders reaffirmed their unwavering commitment and support for increased cooperation in combating terrorism in all its forms and manifestations both within the region and elsewhere. Both sides agreed to enhance bilateral cooperation on issues of common concern, including piracy, terrorism, organised crime, drugs and human trafficking. It was also agreed to intensify cooperation in the areas of training and capacity building of Maldives Police Service and Maldives National Defence Force.
Both leaders reviewed efforts to promote bilateral trade and investment ties between the two countries. Prime Minister Modi welcomed the expanding opportunities for Indian companies to invest in the Maldives in different sectors for the mutual benefit of both countries.
Both leaders agreed to promote closer economic cooperation in sectors such as fisheries development, tourism, transportation, connectivity, health, education, information technology, new and renewable energy and communications.
Both leaders reiterated the importance of an effective multilateral system as a key factor in tackling global challenges. In this context, they also recognised the need to pursue reform of the main UN bodies, including the revitalization of the UN General Assembly and expansion of the UN Security Council.
The prime minister welcomed Maldives’ decision to re-join the Commonwealth. He also welcomed Maldives as the newest member of the Indian Ocean Rim Association.
Both leaders agreed on the importance of combating the impacts of climate change, especially detrimental to developing countries, and Small Island Developing States, and the need to work towards strengthening the global response to climate change, through the UNFCCC, and the Paris Agreement.
The two sides signed the following agreements/MoUs/joint declaration of iIntent during the visit:
MORE REPORTS