Saudi Crown Prince Mohammed bin Salman, who is in the eye of a storm over alleged role in the killing of journalist Jamal Khashoggi in the Saudi consulate in Istanbul, on Thursday met Indian Prime Minister Narendra Modi with proposals of scaled-up investments in India’s tech, farm and energy sectors. 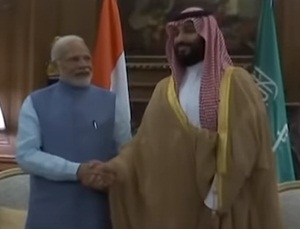 The Crown Price met Modi in his residence in Buenos Aires and discussed Saudi Arabia’s readiness to supply India with oil and petroleum products.
The two leaders are in Argentina to participate in the G-20 summit.
The G20 summit in Buenos Aires is the first major international event the Saudi prince has attended since the Khashoggi Jamal in the Saudi consulate in Istanbul in October.
The Saudi prince is reported to have told Modi that he would soon be finalising an initial investment in India’s National Investment and Infrastructure Fund that was constituted to raise funds for financing investments in ports, highways and other infrastructure projects.
“The crown prince also referred to future projects for investments, in sectors such as tech, energy and farm,” Indian Foreign Secretary Vijay Gokhale, who is accompanying Modi to the G20, said during a meeting.
The two countries are also reported to have discussed ways of Saudi Arabia replacing its agricultural imports from other countries with Indian agricultural produce also, the Saudi news agency said.
Modi, who has vowed to double farmers’ income but could not do anything so far, is looking at new ways of boosting farmers’ income and is ready to go to any length in achieving his objective.
Modi also has high stake in stable oil prices as India imports 80 per cent of its crude oil requirements.
“We expect that in the next two to three years there will be significant scaling up of Saudi investments in India,” Gokhale said. The two leaders also talked about cooperation in arms manufacturing and Saudi Arabia’s efforts to develop a domestic arms industry, SPA said.
Modi stressed the importance of stable energy prices and the two leaders discussed ways in which Saudi Arabia, a top crude oil supplier, could help stabilise prices, particularly for India, Gokhale said.
Saudi Arabia has told India it is committed to meeting its rising oil demand and is the “shock absorber” for supply disruptions in the oil market.
The two leaders also explored investing in solar energy through Softbank’s Saudi-backed Vision Fund and opportunities to export Saudi non-oil products to India
The meeting comes at a time when Saudi oil giant Aramco’s proposed investment in a large refinery project in the west coast of India is facing local opposition, which forced the Maharashtra government to halt land acquisition for the project.
The Indian prime minister will also be meeting with US President Donald Trump and Chinese President Xi Jinping on the sidelines of the G20 meeting.
MORE REPORTS