Prime Minister Narendra Modi has called upon Japanese investors to partner India for the `Make-in-India’ programme that aims to make India a manufacturing powerhouse, saying that his government is focused on improving ease of doing business, and ease of living of the citizens. 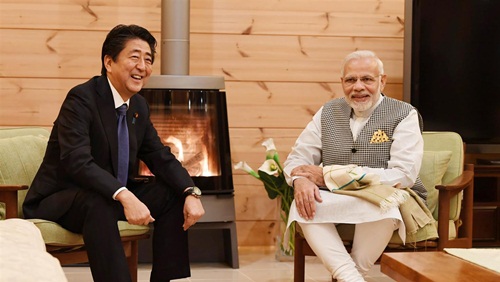 Narendra Modi and his Japanese counterpart Shinzo Abe held informal talks at a picturesque resort near Mount Fuji and visited a factory of industrial robot manufacturer on Sunday as they spent about eight hours together on the first day of a two-day summit.
Modi, who arrived in Japan on Saturday evening to attend the 13th India-Japan annual summit, said the partnership between the two countries has been fundamentally transformed and it has been strengthened as a ‘special strategic and global partnership’.
The summit seeks to review the progress in ties and deepen strategic dimension of the bilateral relationship. Modi was affectionately received by Abe on his arrival at the Hotel Mount Fuji in the scenic Yamanashi prefecture, west of Tokyo.
“Delighted to meet PM @AbeShinzo in the picturesque prefecture of Yamanashi,” Modi tweeted.
Abe hosted a luncheon for Modi at the scenic resort by Mount Fuji. The two also visited the FANUC industrial facility, which specialises in automation.
“Taking our cooperation to modern and advanced technologies. PM @narendramodi and PM @AbeShinzo visited the FANUC Corporation, one of the largest makers of industrial robots in the world in #Yamanashi, and toured the robotics and automation facilities,” ministry of external affairs spokesman Raveesh Kumar tweeted.
Both leaders observed several illustrations of the working of industrial robots. At the motor assembly facility, they witnessed the assembling of a motor by a robot in 40 seconds, officials added.
FANUC contributes to the manufacturing industry in Japan and other countries, including India, by promoting automation and efficiency in manufacturing.
Addressing the ‘Make in India: India-Japan partnership in Africa and digital partnership’ seminar in Tokyo, the prime minister expressed happiness at the large presence of Japanese companies in India. Noting that Japan has been a partner in many important industrial projects in India, the prime minister explained the strength of India’s economic performance over the last four years.
"Some years ago, I spoke about making a mini-Japan in India. It's a matter of great happiness for me that today, you are working in an even larger number in India," PM Narendra Modi said while addressing  the seminar on Monday. The prime minister also stated that 'ease of doing business' was his 'top priority' and said that India and Japan had made "favourable progress."
He said India is today the fastest growing major economy. He mentioned other major transitions in the Indian economy, including the move from informal to formal economy, digital transactions and GST etc.
The prime minister said that India's rising economy, fast growing middle class and young demography offer many new opportunities to Japanese investors. In this context, he mentioned low cost manufacturing, IT industry, and electric mobility, among other sectors.
He emphasised on the shared values between India and Japan. He said that both countries would look to develop stronger development partnerships in other parts of the world, including the Indo Pacific, South Asia and Africa.
PM Modi also met Japanese venture capitalists and attended the Business Leaders Forum in Tokyo and met several senior ministers of the Japanese government.
Modi also lauded the Indian community for ensuring that ‘brand India’ becomes a formidable force by introducing Indian food, cricket and culture to the island nation.
At the event, the Prime Minister told the Indian community, “India is going through a massive transformative phase today. The world is appreciating India for its efforts towards services towards humanity. The policies being made in India, the work being done towards public welfare, for these the nation is being felicitated today.”
After his speech at the event attended by members of the Indian community, PM Modi also met several Japanese venture capitalists in Tokyo on Monday morning, He was also called on by Japanese Minister of Economy, Trade and Industry Hiroshige Seko. "Discussed ways to enhance our economic engagement, especially given METI's role in strengthening our economic partnership," MEA Spokesperson Raveesh Kumar tweeted after their meeting.
A memorandum of understanding was signed between Kanagawa prefecture and India's ministry of ayush in the field of healthcare and wellness during a meeting between PM Narendra Modi and Governor of Kanagawa Prefecture Yuji Kuroiwa.
India is also hoping to have integration between Modi’s Ayushman Bharat scheme and the Japanese programme Asia Health and Wellbeing Initiative.
MORE REPORTS