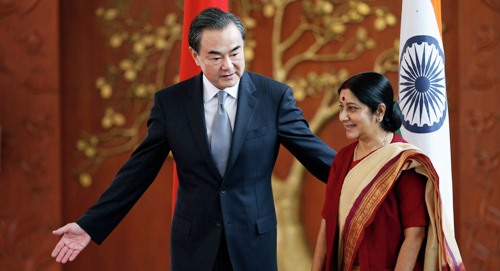 Swaraj is in Beijing on a four-day visit to take part in the foreign ministers’ meeting of the Shanghai Cooperation Organisation (SCO).

She was received by Wang Yi, who has been appointed as a special representative for India-China boundary talks.

Wang was elevated as state councillor last month which makes him the top diplomat of the country in the Chinese hierarchy.

During their meeting Swaraj congratulated Wang on being elevated as state councillor and appointed as the special representative for the India-China boundary talks.

“This shows how much trust your leadership has in your abilities... and I think your new responsibilities will improve India-China relations,” she said. “We will work closely with the Chinese leadership to take India-China cooperation to new heights,” she said.

Wang said the bilateral ties have witnessed good development and shown a positive momentum this year under the guidance of the leaders of the two nations.

“On the eve of the closing of China’s National People’s Congress this year, President Xi Jinping received a very important phone call from Prime Minister Narendra Modi.” He said the call spurred a positive momentum in the dialogue process between the two countries.

“Our two leaders had in-depth exchange of views and reached important consensus on furthering the China-India relationship. We must work very hard to implement the consensus between our two leaders.

“India’s membership to the SCO has expanded the organisation’s potential and its influence, as well as providing a new platform for the India-China cooperation and I believe that India will make a positive and energetic contribution to the organisation,” Wang said.

Following the Dokalam standoff last year, both countries have increased their dialogue to scale down tensions and improve their relations with talks at various levels.

Swaraj and Wang are meeting in the immediate backdrop of the recent meeting between National Security Advisor Ajit Doval and top official of the ruling Communist Party of China (CPC) Yang Jiechi in Shanghai.

Prime Minister Narendra Modi will be visiting China this week for an informal meeting with President Xi Jinping, as efforts at rapprochement in ties between the two giant neighbours gather pace.

“Our common interests far outweigh our differences. The two countries have no choice other than pursuing everlasting friendship, mutually beneficial cooperation and common development,” Wang told reporters after meeting Swaraj in Beijing.

“The summit will go a long way towards deepening the mutual trust between the two great neighbours,” he added. “We will make sure that the informal summit will be a complete success and a new milestone in the history of China-India relations.”

Modi has sought to re-set ties after disputes over issues including their disputed border with Tibet and other issues.

The discussion with Wang was to prepare for the informal summit, Swaraj said.

“It will be an important occasion for them (Modi and Xi) to exchange views on bilateral and international matters, from an overarching and long-term perspective with the objective of enhancing mutual communication,” Swaraj said.