India to invest over £1 billion in UK, safeguard over 5,500 jobs

India and Britain today announced a new partnership under, which India will invest more than £1 billion in the UK that will create or safeguard 5,750 British jobs, post-Brexit. 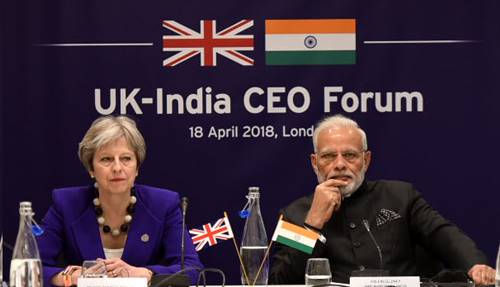 The two sides also announced a wide range of agreements and initiatives across technology, trade and investment after visiting Prime Minister Narendra Modi held talks with his British counterpart Theresa May.
The UK, on its part, will provide additional support to Indian businesses by establishing a reciprocal fast-track mechanism for Indian investments into the UK. A programme of technical cooperation will help in improving the regulatory environment. The two sides will support initiatives of the business stakeholders, including those proposed by the UK-India CEO Forum which met today, to achieve shared prosperity for India and the UK.
The UK has been the largest G20 investor in India over the last ten years and India has the fourth-largest number of investment projects in the UK. "We will begin a new dialogue on investment to improve our mutual understanding of priorities and review future opportunities for cooperation,” the two countries said in a joint statement.
The UK’s Department for International Trade (DIT) said a range of new Indian investments worth more than 1 billion pounds will create or safeguard 5,750 British jobs for the economy as part of the new partnership, which builds on the recommendations of the Joint Trade Review (JTR) between the two countries which concluded earlier this year.
“Removing barriers to trade is a key way in which the UK can capitalise on the predicted growth in world markets and so I’m delighted we have come to this new trade partnership with India,” said Liam Fox, UK international trade secretary.
“It is clear that the opportunities for growth in trade with India are plenty, and as an international economic department we will continue to use tools such as trade missions not only to boost UK exports, but also to help businesses of all sizes forge ties and build cultivate relationships with potential buyers and investors,” he said.
According to DIT figures, total trade in goods and services between the UK and India was £18 billion in 2017, a 15 per cent increase from 2016.
UK exports to India, led by innovative machinery and mechanical appliances, form a large part of this trade basket, increasing significantly by 14.9 per cent.
The new partnership will seek to improve the accessibility of trade for businesses in both countries, as the UK gets ready to leave the European Union (EU).
Focusing on the three key sectors of life sciences, information technology (IT) and food and drink, the partnership will seek to reduce barriers to trade with an eye on Brexit.
Prime Minister Modi will also participate in the Commonwealth Heads of Government Meeting in London from 19-20 April 2018.
The UK and India will work closely together and with other Commonwealth member-states, the Commonwealth Secretariat and other partner organisations to address shared and global challenges. “We are committed to reinvigorating the Commonwealth, especially ensuring its relevance to small and vulnerable states and to our youth, who make up 60% of the Commonwealth's population.”
The Commonwealth Heads of Government Meeting is an important opportunity to address these challenges as we come together and unite under the summit's official theme "Towards a Common Future”. Specifically, the United Kingdom and India will make commitments to help create a more sustainable, prosperous, secure and fairer future for all Commonwealth citizens by taking action, the statement added.
The two countries also announced a technology partnership. “A UK-India Technology Partnership is central to our joint vision and to our prosperity, today and for our next generations. Our nations are at the forefront of a technology revolution. We will share knowledge, collaborate on research, innovate and create partnerships between our world-class innovation clusters. We will deploy our complementary technological strengths to create high value jobs, enhance productivity, promote trade and investment and tackle shared challenges.”
The UK will also establish a UK-India Tech Hub in India as part of the growing bilateral technology partnership.
“Building on the recommendations of the recently-completed UK-India Joint Trade Review, we will work together on a sector-based roadmap, to reduce barriers to trade, make it easier to do business in both countries and enable a stronger bilateral trade relationship after the UK exits the EU. We will also ensure continued application to the UK of EU-India Agreements during the Implementation Period following the UK’s departure from the EU, and put in place arrangements to replicate relevant EU-India agreements beyond this period.”
Both sides welcomed the prominent role played by the City of London in global finance and investment. About 75 per cent of the global value in rupee-denominated "masala bonds” issued on the London Stock Exchange with a third of these being green bonds.
The Green Growth Equity Fund (GGEF), a joint initiative by the governments of India and the UK under India’s flagship National Investment and Infrastructure Fund, will provide financing to the fast-growing Indian renewable energy sector. With a commitment of £120 million from each side, the GGEF is expected to raise up to £500 million from institutional investors. GGEF will help accelerate achieving India’s target of 175GW of renewable energy capacity by 2022 and also invest in other related sectors such as clean transportation, water and waste management. We look forward to future cooperation on energy and infrastructure policy and have agreed to work together on smart urbanisation.
The leaders also reaffirmed their commitment to lead the fight against climate change. Both sides noted that addressing climate change and promoting secure, affordable and sustainable supplies of energy are key shared priorities, and agreed to cooperate on reducing the cost of development and deployment of clean energy projects through technology innovation, knowledge sharing, capacity building, trade and investment, and project establishment.
MORE REPORTS