India and Nepal have agreed to boost bilateral ties with increased cooperation in key areas of defence and security, connectivity and trade. The announcement comes after talks between Indian Prime Minister 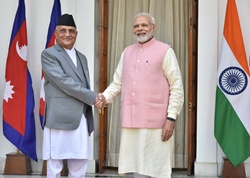 Setting aside concerns over Nepal awarding key development projects to rival China, PM Modi said India will continue to support Nepal on the country's priorities even as both sides have agreed to expedite all connectivity projects.
The prime minister said cooperation between the two countries will enhance Nepal's democracy.
Modi also said the two countries agreed to lay a new railway line to link Kathmandu with India.
India and Nepal have close ties in defence and security and will work together to stop misuse of their open border, Modi said.
Oli said he has come to India to take the bilateral ties between the two countries to newer heights in keeping with the realities of the 21st century.
“We want to erect a strong edifice of trust-based relationship between the two close neighbours that we are,” he said.
The Nepalese prime minister is on a state visit to India from 6 to 8 April, at the invitation his Indian counterpart.
The two prime ministers comprehensively reviewed the entire spectrum of multifaceted ties between the two countries.
They welcomed the growing partnership between the two governments, private sector and at the people’s level and resolved to work together to take bilateral relations to newer heights on the basis of equality, mutual trust, respect and benefit.
Recalling that the close and friendly India-Nepal relations are built on the strong foundation of shared historical and cultural links and close people to people contacts, the two prime ministers underscored the importance of regular high-level political exchanges in cementing bilateral ties.
Prime Minister Modi stated that the Indian government's Sabka Saath Sabka Vikas is a guiding framework for India’s engagement with its neighbours for a shared vision of inclusive development and prosperity.
Prime Minister Oli stated that after the landmark political transformation, his government has given priority to economic transformation with the motto Samriddha Nepal Sukhi Nepali. Modi congratulated the people and the government of Nepal for successful conduct of local level, federal parliament and first-ever provincial elections in Nepal and appreciated their vision for stability, and development.
The two Prime Ministers inaugurated the Integrated Check Post at Birgunj in Nepal. They hoped that its early operationalization will enhance cross-border trade and transit of goods and movement of people bringing greater opportunities for shared growth and development.
The two prime ministers also witnessed the ground breaking ceremony of the Motihari-Amlekhgunj cross-border petroleum products pipeline at Motihari in India.
The two leaders underlined the need for expeditious implementation of bilateral projects in Nepal, and to reinvigorate the existing bilateral mechanisms to promote cooperative agenda across diverse spheres.
Three separate joint statements on the following key areas of mutual interest were issued today. These include:
The two prime ministers agreed that the visit has imparted new dynamism to the multifaceted partnership between the two countries.
Prime Minister Oli thanked Modi for the invitation and warm hospitality extended to him and his delegation. He also extended an invitation to Prime Minister Modi to pay an early visit to Nepal, which Modi accepted. The dates would be finalised through diplomatic channels
MORE REPORTS