India and Japan are likely to go beyond breaking ground for India's first bullet train project and break new ground with agreements in the defence and nuclear power sectors, including India's purchase of Japanese-built US 2i amphibious aircraft and MoUs for nuclear power projects during Japanese Prime Minister Shinzo Abe's two-day stay in the country. 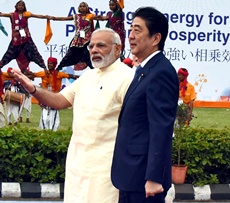 PM Abe, who arrived in Ahmedabad today ahead of tomorrow's ground breaking ceremony of the Mumbai-Ahmedabad high speed train project, will quietly sign other deals in the defence sector as well, say reports.

While a detailed joint statement is still in the works, reports quoting official sources say, the two sides are expected to sign a $1.3 billion deal for India's purchase of US 2i amphibious aircraft built by ShinMayWa of Japan, perhaps the first defence purchase from Japan.

Also, agreements are likely in the nuclear technology field where India and Japan hope to get to the next level.

Japan is expected to seek India's help in rescuing technology giant Toshiba from the financial troubles that Westinghouse has brought upon it, which also necessitated a change in Japanese government's attitude to the nuclear cooperation agreement with India.

The Narendra Modi government will also roll out the red carpet for Japanese nuclear companies that lost the domestic market following the Fukushima disaster.

Major Japanese companies like Hitachi, Toshiba, Mitsubishi and numerous smaller nuclear companies are expected to participate in technology and support services for designing, building and operating reactors to Indian companies.

Westinghouse is being invited to prove technology, components and equipment as well as service expertise for six reactors in Andhra Pradesh, which would have earlier been a turn-key project, but now may be done with an Indian partner.

Japan, on its part, wants a strong ally that is capable of delivering ballistic and cruise missiles as the North Korea crisis deepens and this was revealed by Katsuyuki Kawai, Abe's top foreign policy adviser, who was in New Delhi last week.

With the completion of the civil nuclear deal between India and Japan and both the Japanese and Indian governments ratifying the deal, time is now ripe for the two countries to further expand ties.