Prime Minister Narendra Modi will hold his first meeting with US President Donald Trump when he visits Washington on 25-26 June, an announcement by the ministry of external affairs said today. 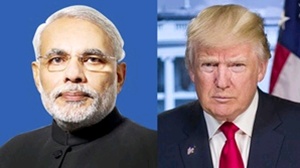 Modi, who is visiting the United States on the invitation on President Donald Trump, will be holding talks with the US President on 26 June, the first meeting between the two leaders.

Although the two leaders have spoken to each other over phone three times since Trump's inauguration in January this year, the upcoming visit assumes importance in view of Trump's efforts for stricter norms for issuance of H1-B visas and the US pulling out of the Paris Agreement on climate change.

Modi will hold official talks with President Trump on 26 June in Washington.

"Their discussions will provide a new direction for deeper bilateral engagement on issues of mutual interest and consolidation of multi-dimensional strategic partnership between India and the US," the statement said.

Modi had visited the US in June last year as well, at the invitation of the then President Barack Obama. Modi also addressed a joint sitting of the US Congress at that time.

In November last year, while congratulating Trump for his election win, PM Modi had said that he was looking forward to working with him closely to take Indo-US ties to a new height.

"We look forward to working with you closely to take India-US bilateral ties to a new height. We appreciate the friendship you have articulated towards India during your campaign," PM Modi had further said.

Responding to the greetings, Trump had at that time extended invitation to the PM to visit the United States.