The United Arab Emirates will invite Indian firms for upstream oil and gas investments, giving energy-deficient India a rare chance to be involved in the hydrocarbon sector of the oil-rich region that accounts for most of its energy imports, reports The Economic Times. 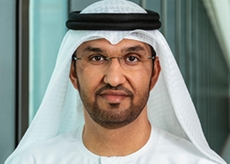 Abu Dhabi National Oil Co (Adnoc) chief executive Sultan Ahmed Al Jaber said the strategic partnership with India had taken a significant step with the deal to store crude oil in India's strategic reserves, and a lot more was in the offing, including his company's investment in new and existing refineries and petrochemical plants.

"We would also like to invite Indian oil companies to come and explore investment opportunities in Abu Dhabi in the field of upstream oil and gas as well as downstream oil and gas in refining and petrochemicals," Jaber told ET in an interview. He was part of the delegation accompanying Abu Dhabi's Crown Prince Sheikh Mohammed bin Zayed Al Nahyan, who was chief guest at India's Republic Day celebrations.

So far, India's fruitful upstream investments have primarily been in high-risk regions such as Sudan or in Russia through bilateral agreements, but the country has not made much headway in its aim for upstream projects in oil-rich regions.

The Adnoc chief said ties with India, one of the biggest energy consumers in the world, were of utmost importance.

On his own company's investment plans in India, he said Adnoc would not like to be limited by an investment number and would seek out all opportunities, particularly in refining and petrochemicals.

"Our approach is going to be a mix of different models. Some are going to be direct investment in existing assets, some are going to be projects that we develop as greenfield jointly from scratch, whether it's in petrochemicals or refining. We cannot and we will not act as a passive investor, because we are not. We are here to add value and the value we bring is not only money... We bring technology, we bring access to market, we bring knowledge and expertise," he said.

Adnoc signed an agreement with Indian Strategic Petroleum Reserves Ltd to store 5.8 million barrels in India. "That, in our view, is a very good step in the right direction for our oil and gas engagement in India. We are very keen to strengthen that relationship... and we are very serious in establishing a new avenue for cooperation of both countries in the field of oil and gas. The UAE will continue to be a reliable supplier," he said.

Adnoc wants to make joint investments with Indian partners. "The model that we would like to engage with them is a true winwin partnership whereby we jointly invest, we can also provide feedstock for the expansion of your petrochemical and refining capacity here in India, and we can also secure some investments from India, in Abu Dhabi," he said.

The investments will involve both public and private firms. "This will have to be done in alignment and an understanding with the government of India," he said. "And I'm sure such investments will happen with representatives from public, government as well as private sector. So it will be both."

Jaber said the oil market was heading towards stability. "I don't want to comment on oil prices," he said. "I think there is a bright (demand-supply) picture in the future, especially for us as producers. Prices of oil are going to stabilise, because there will be a significant demand in the market."

Adnoc would also seek investment opportunities in renewable energy, which it has pursued for a decade to become a broad-spectrum energy player.

"Today, even though we continue to process the fifth-largest oil reserve in the world, and the seventh-largest gas reserve in the world, we have proactively engaged in the advancement of renewable energy," he said. "To us, renewable energy does not represent a threat, whatsoever, to oil and gas and to our position as a true global energy  player ... to us it just makes perfect economic sense."

He said high-quality solar radiation in the Middle East can reduce gas consumed for power generation, which will free up the resource for industrial use or for reinjection into the field or LNG exports.

"So with our view, the integration of renewable energy as part of our energy mix makes perfect economic sense that will prolong the life of our oil and gas resources and at the same time, it will allow us to liberate and free up some of our hydrocarbons currently being used for power generation. So this is just a logical step," he said.