Prime Minister Narendra Modi on Wednesday set the tone for his summit meeting with Russian president Vladimir Putin, citing India's close ties with over the decades. Modi will have extensive deliberations with President Putin. Besides, he will interact with Russian businesspersons and invite them to invest in India 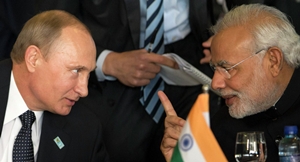 ''History is witness to the close ties India and Russia have had over the decades. Russia remains one of India's most valued friends in the world,'' Modi said.

''Indians will never forget the Russian support that we got when we needed it the most,'' Modi told Itar-Taas news agency ahead of his visit, referring to the former Soviet republic's defence supplies and support when it was needed most – during the Bangladesh war of independence, which India supported.

Modi will also attend a 'Friends of India' programme, which, he said, will substantially take forward the already strong people to people ties between the two nations.

Modi repeated the sentiments in a tweet hours before leaving for Moscow: ''Am very optimistic about outcomes of my Russia visit. It will deepen economic & security ties with a valued friend.''

India and Russia are likely to ink a number of pacts in sectors including defence and nuclear energy, during the visit, the high point of which will be Thursday's 16th annual summit between the countries.

Modi is visiting Russia at a time when the local economy is under stress because of declining oil prices and Western sanctions.

Besides, Russia's recent rift with Turkey and its decision to snap of ties with one of its biggest business partners, after Ankara downed a Russian Su-24 in Syria, has also opened the field for India.

For energy-starved India, the third-largest oil importer after the US and China, participation in oil and gas exploration projects in Russia is a top priority.

Moscow has also been a dependable ally for defence cooperation and the main source of military equipment for India through decades.

Modi is expected to land in Moscow around 5 pm local time (7.30 IST) on a two-day visit and is scheduled to attend a private dinner hosted by Putin at the Novo-Ogaryovo, his dacha or country house about 27 km from Moscow on the first day of his official visit.