India, Russia to boost ties; new Kudankulam units may have to wait 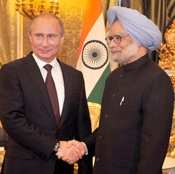 India and Russia are expected to sign a number of agreements at the conclusion of the annual summit meeting between Prime Minister Manmohan Singh and Russian President Vladimir Putin.

While Singh's 20-22 October visit to Russia is mainly for the annual summit meeting, India hopes to wrap up agreements to strengthen energy cooperation with Russia among others.

Many analysts also say the visit could add to BRICS's efforts to get the financial world out of the stranglehold of the dollar.

BRICS nations have planned a new fund with a $100-billion capital to lend to infrastructure projects within the developing countries, as part of the programme to move away from the dollar's dominance.

ONGC Videsh Ltd, the overseas arm of state-owned Oil and Natural Gas Corporation Ltd (ONGC), has expressed interest in oil and gas exploration in Russia's Arctic zone, after India received observer status in the Arctic Council in May.

The two countries are also looking at joint production of passenger aircraft.

Besides, India is looking for Russian investments in infrastructure building, especially for building townships along the Delhi-Mumbai industrial corridor.

However, the two sides do not expect to sign a commercial pact on Russia building two more atomic power plants at Kudankulam in Tamil Nadu as the two sides are reviewing the modalities of the agreement to suit tougher nuclear liability norms.

Legal experts of both the sides are engaged in reviewing the text of the agreement on the Units 3 and 4 reactors in the Russian-aided project in Kudankulam in Tamil Nadu's Tirunelveli district before it can be approved.

On his arrival at the Russian capital Moscow on Sunday, the prime minister told the media that the 14th Summit is a pointer to the privileged special partnership that India and Russia share.

"We are going to review our partnership and its progress in diverse fields such as atomic energy, defence cooperation, space cooperation, science and technology, trade and investment and also review the international and regional development and how they impact on our two countries and how we can work together to keep the world safe for peace and prosperity," the prime minister said.

Addressing media persons on his departure to Russia on Saturday, Manmohan Singh had pointed to the convergence of views of India and Russia on global and regional issues.

''I will convey to President Putin our interest in deepening our consultations and coordination on international issues.''

Bilateral trade, which has been lagging so far, has picked up, clocking $11.04 billion in 2012-13, a growth of 24.5 per cent, according to foreign ministry data. ''If this pace is maintained, our trade would cross $20 billion in 2015,'' foreign secretary Sujatha Singh said on Friday.

India and Russia were looking at liberalising the trade environment, she said, adding: ''We have suggested a comprehensive economic cooperation agreement between India and the customs union of Belarus, Kazakhstan and Russia, which we hope will be initiated soon.

Sectors such as chemicals, pharmaceuticals, automobiles, telecommunications, infrastructure and fertilizers were areas that both countries were eyeing to boost bilateral investments, the foreign secretary said.

On the second leg of his two-nation tour, Singh will arrive in Beijing tomorrow where the two countries are expected to sign agreements to stabilise the border. An agreement on China setting up industrial parks in India is also likely.

Singh's visit to Beijing is also significant that this is the first time since 1954 that India and China have exchanged visits at the prime ministerial level in the same calendar year, after Chinese Premier Li Keqiang visited New Delhi in May.