India plans to set up a special fund to provide insurance to refineries that import Iranian crude oil, a senior government official said on Sunday.

The move becomes necessary as European re-insurers are refusing to cover units that process oil from that country due to Western sanctions on Iran. 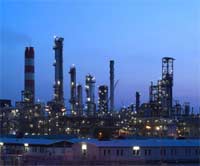 Insurance companies in the country too have refused cover to refineries processing Iranian oil as they cannot get reinsurance from their European counterparts. Reinsurance makes up for 90 per cent of the insurance cover provided to refineries.

New Delhi fears that next the insurers would seek a certificate that fuel exports out of India are not out of of Iranian oil.

"We are told that under European law, reinsurance outside Europe is not hit by sanctions (against Iran)," petroleum secretary Vivek Rae told reporters in New Delhi.

The issue is now being examined in consultation with the ministry of external affairs, he said, adding refineries will get insurance cover if New Delhi's understanding is confirmed by the European Union and insurance companies accept it.

"If we get the insurance, it (oil import from Iran) not a problem," he said.

Rae said the department of financial services is working on creation of an insurance pool fund in India to provide insurance cover to refineries. The fund will be created by contributions from both insurance companies and oil industry.

He said refiners are talking to the reinsurers. "At the moment oil is being imported from Iran. But the problem will arise if the refineries don't have the insurance cover. We cannot import crude from Iran in such a scenario."

The move to set up a separate insurance fund will help all refineries importing crude oil from Iran, particularly Mangalore Refinery & Petrochemicals Ltd, whose current insurance cover is coming to an end in May and which has so far not found any insurer willing to hedge its risks.

Presently, Indian general insurers provide cover to oil refiners and then re-insure the risk with global re-insurers. But under US and EU sanctions, the global insurers provide re-insurance with "sanction clause", which limit the amount to be paid in case a claim arises.

India, the world's fourth-biggest oil importer, has struggled to get tankers and insurance for transporting supplies from Iran after the US and the European Union imposed sanctions on the nation to curb its controversial nuclear programme.