The Supreme Court has upheld the validity of the 10 per cent reservation in employment and education for the economically weak among general category, saying that the EWS quota does not violate the equality code. 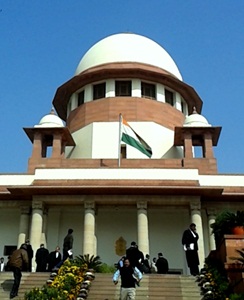 A five-judge bench of the Supreme Court hearing a bunch of petitions against the Constitution 103rd Amendment Act 2019, which provides for 10 per cent reservation for economically weaker amongst the general category, has upheld the validity of the amendment
The bench comprising Chief Justice UU Lalit Justice Dinesh Maheshwari, Justice Bela M Trivedi, Justice S Ravindra Bhat and Justice JB Pardiwala upheld the EWS quota by a 3:2 split verdict.
While Justices Dinesh Maheshwari, Bela Trivedi and JB Pardiwala upheld the 103rd Constitution Amendment, Justice S Ravindra Bhat wrote a dissenting judgment to strike it down. Chief Justice of India Uday Umesh Lalit concurred with the minority view of Justice Bhat.
The CJI pointed out that there are four judgements to be delivered on the issue relating to the constitutional validity of reservations of the Economically Weaker Section (EWS) in higher education and issues of public employment on the basis of financial conditions.
Justice Dinesh Maheshwari in his judgement said the EWS amendment does not violate the equality code or violate the essential features of the Constitution and that the breach of 50 per cent overall reservation limit does not violate the basic structure.
“There are some issues and points of determination as to whether it violated basic structure, secondly, if the exclusion of backward classes from getting EWS is violating the equality code and basic structure,” Justice Maheshwari said.
The court delved into whether there was a breach of the 50 per cent ceiling. Later, Justice Dinesh Maheshwari concluded, saying, “It does not violate the equality code and basic structure.”
Justice Bela Trivedi said, “I have concurred with Justice Dinesh Maheshwari.”
The Supreme Court had reserved its order on the matter on 27 September, after hearing over 20 counsels in seven days.
MORE REPORTS