This Rs1.76 trillion amount needs to be seen as a sum of three numbers which bear different connotations and has varied impact on the fiscal deficit and bond markets, system liquidity and the overall issue of RBIs capital, reserves, balance sheet strength and its independence, says Arvind Chari, head, Fixed Income, Quantum Advisors 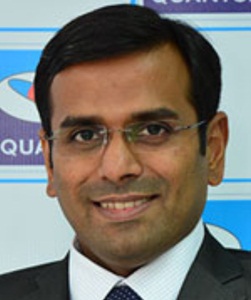 The Reserve Bank of India, in a post board meeting press release, announced that the Board has decided to transfer INR 1.76 Trillion (1,76,000 crores) surplus to the government.
This INR 1.76 trillion amount needs to be seen as a sum of 3 numbers which bear different connotations and has varied impact on the fiscal deficit and bond markets, system liquidity and the overall issue of RBIs capital, reserves, balance sheet strength and its independence. We will try and provide our views through this column.

(Source: RBI Press Release)
Impact on Fiscal Deficit and Bond Markets
The larger than anticipated dividend and the ‘one-time’ excess capital windfall should ease the fiscal worries to a large extent. According to our estimate, the revenue growth is running short by almost INR 1 trillion (INR 1,00,000 cr). Thus the 52,000cr payout will help bridge the revenue shortfall and allow the government the space to still keep the fiscal deficit to the budgeted 3.3% of GDP.
The Bond markets biggest worry has been on fiscal slippage on weaker revenues and/or the government announcing a fiscal stimulus package given the narrative of the economic slowdown. The longer end of the bond market [10 year (`6.4% s.a.) and above maturities (~6.7%-6.9% s.a.)] is reflecting this worry and hence is trading at a steep spread over the current Repo Rate of 5.4%.
This government has tried to remain prudent and somehow manage to meet the budgeted fiscal deficit numbers. The fact that there was no fiscal stimulus announced last week by the finance minister in her packages was comforting for the bond market. We do hope that the government uses this windfall to balance the fiscal for this year instead of using it to announce some spending program. To be sure, if you add the Centre Fiscal Deficit, the State government fiscal deficit and the borrowings by the PSUs, total government related fiscal spending is already estimated at 8.5%-9.0% of GDP. We don’t need a stimulus.
If they remain prudent, then we should expect bond yields to move lower further from current levels as the RBI still has monetary policy space given that CPI Inflation remains well below its target. So as Repo rate gets cut further, the bond yields should also reflect especially as fiscal prudence prevails.
We still believe any bond yield fall from current levels to be only tactical and that the best of the bond market gains may be behind us. We will change this stance only when we believe that the RBI will be able to cut the Repo Rate well below 5%. As of now, we don’t share that view.
Impact on Liquidity and Lending Rates
As mentioned in the table above, given that the government is over-drawn to about INR 1 trillion and has already spent that money into the system, there is no material liquidity impact of the Dividend Payment. The excess capital payout of INR 50,000crs depending on how and when it is paid will add to system liquidity and increase the ‘Core’ Liquidity to around INR 1.5 trillion. We expect the RBI to maintain surplus liquidity of around 1% of NDTL (Net Demand And Time Liabilities) for some more months to come to allow the transmission of their rate cuts to flow through the banking system onto the economy.
We expect continued lending rate cuts by the banks in the months to come. As mentioned in our post MPC article, investors should also expect lower returns from liquid and money market funds.
Does this impact the RBIs capital, reserves and independence
We were deeply concerned late last year when the RBI-Government fracas was out in the open and we outlined our view through this article  titled RBI Under Attack, which was written in the backdrop of Dr. Viral Acharya’s independence speech in October,2018, the controversial RBI Board meeting in November, 2018 and Dr. Patel’s resignation in December, 2018.  Apart from opining on the issue of RBIs independence, We compared the Balance sheet of the RBI with other global central banks to determine if and whether the RBI indeed has excess capital. (See Table 2, Below)
We are glad to note the recommendations of the Jalan Committee report on the framework to determine the economic capital of the Reserve Bank of India. We have to always keep in mind that India remains an Emerging Market country with its own macro frailties and a government which runs a fiscal deficit on whom the RBI cannot depend on capital infusion if things go bad. The RBI thus needs to have its own sufficiently large capital buffer.
The Jalan committee, I believe, has put this matter to rest by laying down the following:
The Point no.1 follows the normal accounting prudence of paying dividend only out of income and profit earned and not by profit accrued but not realized which shows up as Revaluation Reserves in RBI’s balance sheet, as explained in detail in our article link above.
Point no.2, is where the 52,637 crs has emanated from as the Board of the RBI decided to keep the Contingency Capital at the lower band of 5.5% and hence paid out the excess to the government. This also means that for it to pay it again, the contingency capital would have to rise above towards the 6.5% level for a fresh surplus to be transferred. This is why we believe this capital transfer to be a ‘one-time’ in nature.
Point no.3 details how the annual dividend of the RBI will be paid. For every year, if the economic capital is between the 20% -24.5% ranges, the entire annual surplus can be paid out to the government as dividend. This explains the INR 1,23,414 cr annual dividend for the period July 2018- July 2019. 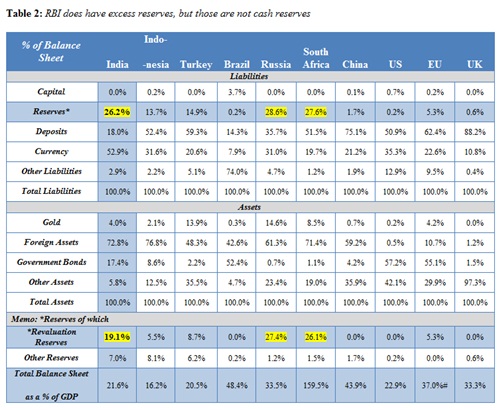 (Source: Annual Reports of Central Banks, Classification into items is as per the authors understanding; # Euro GDP is of 19 countries which use the EURO as a Currency; Data for India is as of June 2018; UK is February 2018, rest all is as at December 2017)
MORE REPORTS