In a historic initiative that would facilitate Sikh pilgrimage to one of the holiest Gurudwaras, the Gurdwara Darbar Sahib in Pakistan's Kartarpur district right across the international border, Pakistan Prime Minister Imran Khan today laid the foundation stone for the Kartarpur Corridor. 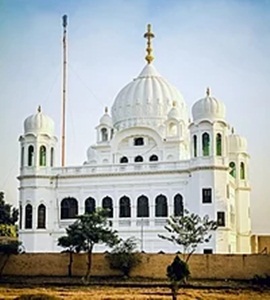 The groundbreaking ceremony for the Kartharpur Corridor on the Pakistan side comes three days after India performed the groundbreaking ceremony on its side for the initiative to connect Dera Baba Nanak shrine in Punjab's Gurdaspur district to Gurdwara Darbar Sahib in Pakistan, the final resting place of Sikh religion’s founder Guru Nanak Dev.
The distance between Gurdwara Darbar Sahib and Dera Baba Nanak shrine is just about four kilometres.
India was represented by union ministers Harsimrat Kaur Badal and Hardeep Singh Puri, and Punjab cabinet minister Navjot Singh Sidhu at the ceremony at Narowal in Kartharpur that was attended by Pakistan Army Chief General Qamar Javed Bajwa and other officials.
While union ministers Badal and Puri reached Pakistan today to attend the groundbreaking ceremony of Kartarpur Corridor, Punjab minister Sidhu had reached Kartarpur yesterday.
External affairs minister Sushma Swaraj, who was invited by the Pakistan government for the ceremony, had expressed inability to travel and instead nominated Puri and Badal to attend the ceremony.
Both the union ministers crossed over into Pakistan at the Attari-Wagah border in Punjab earlier today. Puri expressed gratitude to the Pakistani government before stepping foot on the Pakistani soil for the foundation-laying ceremony. “I feel extremely grateful and privileged to be able to make this pilgrimage. This was a long-standing demand of the Sikh community. Express gratitude also to the Pakistan government,” he said.
The Kartarpur Corridor will allow visa-free travel for Indian Sikh pilgrims to Gurdwara Darbar Sahib.
The foundation stone for the corridor was laid in Punjab’s Gurdaspur district on Monday by Vice President M Venkaiah Naidu. Puri said the Indian government hopes to complete construction work for the Kartharpur Corridor in about 5-6 months.
Depending on Pakistan completing work at its end, pilgrims from India would be able to pay obeisance at Gurdwara Darbar Sahib in Pakistan, which is also close to the border.
Pakistan foreign office spokesperson Muhammad Faisal said work on the corridor will be over in time for the 550th birth anniversary of Guru Nanak Dev in November next year.
The proposal to build the Kartarpur Corridor was mooted by India around 20 years ago. However, it was last week that both Pakistan and India announced the move to develop the corridor on their sides of the border.
MORE REPORTS