Prime Minister Narendra Modi today unveiled the ‘Statue of Unity’ at Kevda, in Gujarat, dedicated to the Iron Man of India, Sardar Vallabhbhai Patel, which is also the world’s tallest statue. 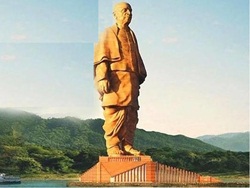 At 182 meters (597 feet), the steel, concrete and brass-clad statue, built by engineering and construction major Larsen and Toubro, is the tallest in the world and was completed in a record 33 months.
Modi, who ordered the statue built on the Narmada river when he was Gujarat chief minister, said last year there had been efforts to “belittle” or “remove from history” the contributions of Patel, who helped unite India’s 562 princely states as the first home, or interior, minister.
Funds for the statue came from the federal government, state-run companies and other institutions.
Patel in depicted in traditional attire, with a shawl over the shoulders. The statue used 210,000 cubic metres of cement, 25,000 tonnes of steel and 1,700 tonnes of bronze.
The buildings and factories business of the construction arm of L&T won this
prestigious EPC contract for the design and construction of the `Statue of Unity’ from the government of Gujarat in October 2014 and construction of the raft of the statue began in December 2015.
Sardar Patel is widely considered as the architect of modern India, who was responsible for uniting the newly-independent nation. The SoU, on the Sadhu Bet Island, approximately 3.5 km south of Sardar Sarovar Dam at Kevadia in the Narmada district of Gujarat now stands tall as an inspiration to future generations, a reminder of Sardar Patel’s sterling contribution and a symbol of national harmony and integrity.
“The Statue of Unity, apart from being a symbol of national pride, and integration is also a tribute to India’s engineering skills and project management abilities. Larsen & Toubro has delivered several projects of national significance and we are proud to be associated with building the world’s tallest statue, which is a fitting homage to the Iron Man of India - Sardar Vallabhbhai Patel,” S N Subrahmanyan, chief executive officer and managing director of L&T,  said.
“Our engineering and construction teams along with the architects, the sculptor, and reputed global consultants, have realised this dream of honourable prime minister into reality in record time. Our commitment to scale, speed and quality in engineering has yielded this desired outcome, which is not only structurally superior but aesthetically appealing as well,” he added.
MORE REPORTS