A new series of gross domestic product (GDP) data with the baseline of 2011-2012 shows that India achieved higher growth rates than previously thought between 2003-04 and 2012-13. 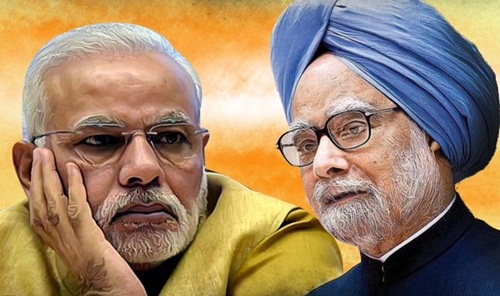 GDP data based on the new series, formulated by a new government-commissioned study provided recently by the ministry of statistics, show that the Manmohan Singh government delivered 10.23 per cent growth in 2007-2008 and 10.78 per cent in 2010-11.
The current government has not been releasing GDP data for the last three years after the Central Statistics Office (CSO) changed the method by which it calculated GDP in 2014-15. The CSO has changed the base year for calculation from 2004-2005 to 2011-2012.
Economists and policy-makers have been finding it difficult to compare India’s GDP growth over a long period of time as the GDP data released from 2015 onwards used only the new methodology.
However, a recently released study on ‘real sector statistics’ – constituted by the National Statistical Commission, which comes under the ministry of statistics and programme implementation – provides back-series data from 1994-95. This allows for a comparison of growth trends between the two different methodologies (2004-2005 and 2011-2012). 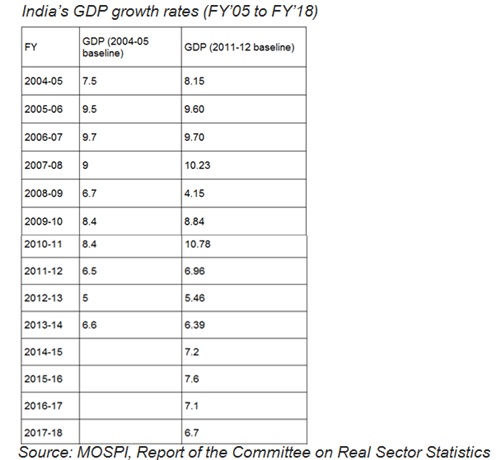 While the data shows that the two GDP series calculated similar growth trends directionally-speaking – there are no large-scale variations – the new series shows higher growth rates from 2003-2004 onwards.
For instance, it shows that the economic performance of the Manmohan Singh-led UPA-I government was better during its first four years compared to the current Narendra Modi-led NDA government's.
As per the back series data compiled by the committee on real sector statistics, the average GDP growth rate from 2004-05 to 2007-08 works out at 9.42 per cent compared to 7.15 per cent during 2014-15 to 2017-18.
Moreover, it was also during Manmohan Singh’s government that the Indian economy scored a double-digit economic growth in 2007-08 (10.23 per cent) for what is likely the first time ever. The UPA government repeated this double digit performance in 2010-11.
What is even more surprising is that the average GDP growth during the last four years of the UPA-II government, the years of "policy paralysis", is also higher at 7.39 per cent.
The committee, which was set up by the National Statistical Commission, undertook its work through sub-committees. The sub-committee on linking new and old series GDP was chaired by NR Bhanumurthy, professor, National Institute of Public Finance and Policy (NIPFP).
Significantly, the UPA-II government fared better than the NDA despite the headwind of high oil prices that it faced.
It is also true that India has become the world’s sixth largest economy, supplanting France under the Narendra Modi-led NDA government.
Meanwhile, the World Bank has forecast that India will remain the world’s fastest-growing economy over the next three years too. The World Bank, in its June Global Growth Prospect report, has projected a growth rate of 7.3 per cent for India in 2018-19 this year and 7.5 per cent each for the next two years on the back of robust private consumption and strengthening investment.
In its bi-annual World Economic Outlook released in April, the International Monetary Fund (IMF) also kept its growth projections for India unchanged at 7.4 per cent for 2018-19 and 7.8 per cent for 2019-20. It cited fading effects of demonetisation and GST implementation to justify its bullish projections.
MORE REPORTS