The United nations has offered help in tackling the flood situation in Kerala if a formal request is made and said it was monitoring the situation, after the worst flood in a century killed over 324 and caused losses of an estimated Rs20,000 crore, including crops worth Rs8,000 crore and property worth several thousand crore. 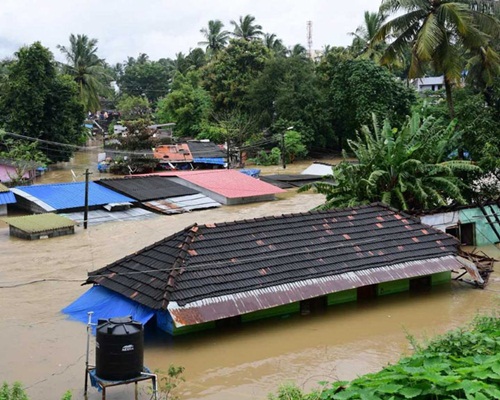 ''The UN is saddened by the loss of life, destruction and displacement caused by the floods in India's Kerala, which is the worst flooding in about 100 years,'' UN chief's spokesperson Stephane Dujarric said.
Replying to a question, the spokesperson said that India has so far not asked for the UN assistance in tackling the floods in Kerala.
''There has been no request for help,'' he said adding, "as you know that India has quite a well-operating machinery to deal with natural disasters."
"But, of course, our country team — I have been in touch with our Resident Coordinator (Yuri Afanasiev)... they are following closely, they are in touch with partners on the ground," he said.
Meanwhile, a fresh red alert was sounded in 13 of the 14 districts in the state as all nine flood monitoring stations of the Central Water Commission notified ‘extreme flood situation’.
NGOs have joined 52 teams of the Army, Air Force, Navy, Coast Guard and NDRF in relief and rescue operations in flood-ravaged Kerala but the efforts proved too little on Thursday as the scale of the disaster unfolded.
Pathanamthitta district continued to remain the worst-affected over the last 24 hours with thousands of people stranded at their homes in Ranni, Aranmula and Kozhencherry towns.
Water levels in several parts of Pathanamthitta, Ernakulam and Thrissur districts rose to as high as 20 feet, turning streets into deep lakes, forcing rescuers to deploy inflatable boats to evacuate people.
Damage to crops and properties across the state is estimated to be over Rs20,000 crore. CM Pinarayi Vijayan spoke to PM Modi and other central leaders again on Thursday to request more help.
After a meeting of the National Crisis Management Committee (NCMC) earlier in the day, the centre decided to send 35 more NDRF teams, comprising nearly 1,000 personnel.
“The first 12 teams will reach Kerala. The rest 23 teams are being sent gradually. The teams are equipped to assist state government authorities in launching quick relief, rescue, medical aid and food distribution tasks in both daytime and at night,” news agency PTI quoted NDRF director general Sanjay Kumar as saying.
Prime Minister Narendra Modi also arrived in Kerala on Friday night to review the situation in flood-hit areas in Kerala. He arrived in Kochi on Saturday morning to undertake an aerial survey of the affected areas and review the relief and rescue operations being carried out there.
MORE REPORTS