India needs to focus on a broad-based inclusive economic growth generating more employment rather than addressing grievances of sections of population that would only render the society more divisive, former RBI governor Raghuram Rajan said on Sunday. 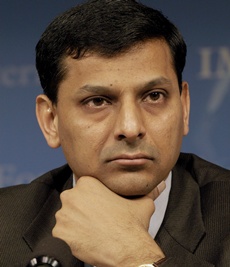 He said populist policies have the potential of damaging economic growth in the long run. Governments often tend to appease vocal sections of population and this is often articulated as the majority community's feelings of aggravation at being discriminated against.

He said short-sighted political solutions to issues like education and employment like quotas and reservations could damage the fabric of the country in the long run.

Rajan's comments come in the backdrop of agitation by powerful communities, including the Patidar community in Gujarat, that tries to seize electoral advantage through divisive politics by seeking reservation in jobs.

"We need to focus on that as the ultimate solution rather than emphasise grievances... (they are) politically in short-term very convenient but have potential to bring apart the fabric of this country," Rajan said.

Rajan made these comments referring to rising populist nationalism and also agitation by powerful communities, including Patidar community in Gujarat which is feeling discriminated and is seeking reservation in jobs.

In a recorded conversation, which was shown at a literature fest in the national capital, Rajan said populist nationalism is the bane of politics all over the world and India cannot be an exception.

"Populist nationalism is damaging to economic growth... it has to set back the economy because it is divisive. It feeds on the sensation of the majority community feeling it is being discriminated against," Rajan said in response to a query on the issue.

"It exists all over the world and also in India, while people exploit this sense of grievance," he said, noting that the issue of reservations in the country is an instance of the phenomenon.

"It is important to tackle the underlying economic problem (jobs). One cannot overstate the grievance of the majority community because minorities have also faced discrimination historically," Rajan said.

Populist nationalism is "inward-looking", while policies it advocates "often come in the way of growth," Rajan said, adding that such nationalism has nothing to do with patriotism either because it is divisive and can even be quite dangerous.

However, he said it is wrong to dismiss people who are voicing these things are irrelevant. "These protests have a sense of identity that is being eroded...that cry also has to be heard," he said.

In the ultimate analysis, Rajan said, these protests are a reflection of the strength of India's democracy.

"There may by push and pulls in the working of democracy, but in the long-term it is beneficial. It is egalitarian, takes people along together, a superior mechanism to identify the flaws in the market system and for the system to react," he said.

About "illiberal democracy", Rajan, who is currently professor in the University of Chicago, said that it was "a function of the system, which kowtows to the strong leader."

"Business leaders, apart from some exceptions, tend to bow to the political leader. Liberal democracy is crony capitalism also because the interests of business and political leaders coincide," he said.

He also referred to a "cosy relationship" between the corporate and the political leadership in which the mass media, mostly owned by corporates, exploit the political class for its gains.