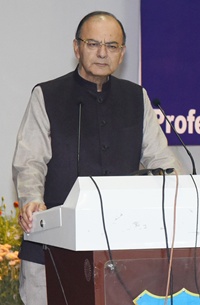 Finance minister Arun Jaitley today hinted at a general reduction in tax rates - supported both by better compliance and the introduction of the goods and services tax - saying that India needs to move to a lower level of taxation to be globally competitive.

Jaitley made remarks at the inauguration of professional training of the 68th batch of Internal Revenue Service (Customs and?Central Excise) officers in New Delhi today.

"What you need is lower level of taxation, to provide services more competitive in nature. Competition is not domestic, it is global. This is one important change you will witness while you will be in service," Jaitley said.

A lower level of taxation also will support voluntary compliance by taxpayers by bringing about a change in the mindset of taxpayers, Jaitley said, adding that the country is foreseen in future decades as one where voluntary compliances will have to increase and the tax payer accepts legitimate taxes as a responsibility.

The finance minister said, ''Payment of legitimate taxes is part of a citizen's duty and non-payment is visited with severe consequences.

''We have lived through last seven decades in India under impression that if avoidance could be done of government revenue, there wasn't anything immoral. That was considered to be commercial smartness.

Earlier on 23 December, at a press briefing after the GST Council meet the finance minister had said, "I am trying my best (on deadline of 1 April 2016). I don't want to hasten the process of discussion and don't want to delay the implementation."

Jaitley had on Sunday also clarified that there was no plan to impose long-term capital gains tax on securities investments, after a statement by prime minister raised such a suspicion.

He said any report that the coming budget is likely to introduce this much-feared tax is an erroneous interpretation of the prime minister's speech.

"This interpretation is absolutely erroneous. The prime minister has made no such statement directly or indirectly. I was present at the function in which this speech was given. I wish to absolutely clarify that there is no occasion or opportunity to anybody to reach such a conclusion because this is not what the Prime Minister said nor is it the intention of the government as has been reported in some section of the media," he said.

In his speech at the National Institute of Securities Market on Saturday, prime minister Narendra Modi had hinted at possibility of such a tax, saying, "...Those who profit from financial markets must make a fair contribution to nation-building through taxes. For various reasons, the contribution of tax from those who make money on the markets has been low," he said.

This had raised the suspicion that the government may be planning to introduce a long-term capital gains tax on Securities investments.

As of now in India, long-term capital gains from equity and mutual funds are not taxed. Short term gains are taxed at 15 per cent.